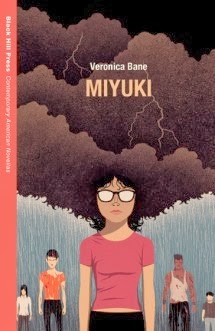 In the town of Jericho, a group of misfit teenagers haunts the underbelly of their society. Armed with the ability to manipulate different parts of nature, these teenagers fight for their right to stay alive. In the months following an attack on their lives, danger still lurks around them. Those behind the original strike have risen from the ashes, and new powers are beginning to reveal themselves. With this mysterious threat imminent, Mara, Miyuki, and the rest of the Unusuals must stand together to fight. However, time is running out for the group because someone, or something, is hunting them, and this time around, not all of them will survive.

Miyuki is a return to dangerous, secretive Jericho, a town where people who are different are feared and quite often hunted down, a town where some rather unusual teenagers are fighting back while also winging it a bit.

The group is back, complete with Mara, Miles, Miyuki, Chris, Alex, and Terry. After meeting The Stranger and knowing what he's up to, they continue training in order to fight back, to push back, to save the others like them and put a stop to the death and slaughter. Mara's continued anger at her brother fuel her need for revenge and she struggles to move on from it, to focus on the task at hand, but it sounds like there's something dark in her past concerning him. Miyuki is focused more on finding others like them and keeping them safe. Like before, the two girls clash, perhaps because they both want to be in charge, both attempt to direct the action and their mission.

Enemies abound in this story both old and new. Danger is always following them, watching them. People are still after the Unusuals, wanting to find them, stop them, kill them. Things get dangerous rather quickly.

It felt like things were happening a lot faster in this book than in the first book. There is some back story at the beginning, some reminding, but then it seems to jump right into the action, right into the suspense and the fighting. Now that they know what they are, that they're not alone, that they're hunted, they're forced to fight for their lives. I hope that the next installment will come soon because, after that ending, I'm desperate to know what happens next. And I'm still shocked about who died. Wow.