Me on Dreams of Gods & Monsters 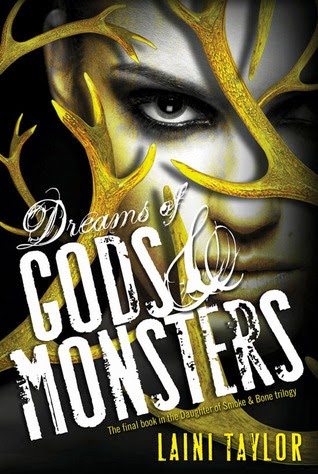 By way of a staggering deception, Karou has taken control of the chimaera rebellion and is intent on steering its course away from dead-end vengeance. The future rests on her, if there can even be a future for the chimaera in war-ravaged Eretz. When Jael's brutal seraph army trespasses into the human world, the unthinkable becomes essential, and Karou and Akiva must ally their enemy armies against the threat. It is a twisted version of their long-ago dream, and they begin to hope that it might forge a way forward for their people. And, perhaps, for themselves. Toward a new way of living, and maybe even love. But there are bigger threats than Jael in the offing. A vicious queen is hunting Akiva, and, in the skies of Eretz, something is happening. Massive stains are spreading like bruises from horizon to horizon; the great winged stormhunters are gathering as if summoned, ceaselessly circling, and a deep sense of wrong pervades the world. From the streets of Rome to the caves of the Kirin and beyond, humans, chimaera and seraphim will fight, strive, love, and die in an epic theater that transcends good and evil, right and wrong, friend and enemy. At the very barriers of space and time, what do gods and monsters dream of? And does anything else matter?

Dreams of Gods & Monsters is an epic and powerful tale of pain and magic, of hopes and dreams, of life and death. The end is coming, a war is coming, and Karou and Akiva stand at the brink with their patchwork army against a tyrant and a secret huntress no one sees coming. Will they survive, live to continue their dream of peace, or will their hopes shatter at their feet?

Karou and Akiva, while together, still manage to be heartbreaking. Different sides, different missions, but the same dream for the future. After the first two books, after their revelations and actions, their plans and surprises, what are they to each other? Not enemies, not anymore, but not lovers. Well, not exactly. They're prevented from being together, by the coming battles and by themselves, by what they've seen around the other and inside their own hearts and minds. Their first story, the story of Akiva and Madrigal, was tragic, ending in screams of pain and misery. This one, their second chance, started with surprise, with hopes renewed, and continued again down that path of despair and death. They've battled long and hard, with chimaera, with angels, with monsters, and now the end is coming. But what kind of end?

Something that's always pulled me in with this series is the world-building and this book is no different. Earth, Eretz, the skies, the stars. Everything is something the author has crafted, and crafted beautifully. The vast deserts, the caves of the Kirin, the streets of Rome. Pulled from reality or from imagination, the locations have a life of their own. And they expand as the story expands, as it reaches out and pulls in more characters, more hopes and fears. It grows almost too big, nearly overwhelming the story, but it's all connected in curious and magical ways.

So primal are the emotions felt by those in this book. The burning need to survive. The bitter flame of anger. The crippling sadness. The cold, shaking fear. The bright shine of hope. The gentle pulse of love, like a heartbeat felt by pressing an ear to the chest of a loved one. No emotion is spared. It is enough to bring one to their knees.

There is a lot of anticipation in this book, a lot of build up. Something is coming, something big, something overwhelming. And then the explosion happens, then everything happens, and everything is revealed. Before reading this I re-read the previous two books, taking in the entire story in one long gulp instead of tiny sips over time. Doing that left me wondering if any words I could express about this book would be enough. I don't think I've been more overwhelmed than I have with this book and this series. I've been left in a magical, painful, and glorious head space, dripping with dreams and starlight.