Me on Horimiya Volume 6 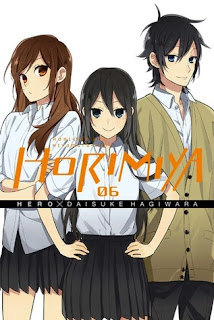 For Hori and Miyamura, being together, even at school, is now completely natural. But they don't just have each other! As the pair navigates the intricacies of being a couple, they interact and connect with the people around them, who in turn make their world all the more colorful. But Hori and Miyamura's friends are no strangers to the bittersweet pangs of love either...

Horimiya Volume 6 is more of the same. More Hori being unsure about a number of things. More Miyamura opening up to people around him. More of their friends dealing with their own situations and feelings. More of Hori's dad being useless. But sometimes, in a comedic series like this, there are moments that make me think.

There are two rather important moments that happen in this volume, so hopefully you're forgive me for spoiling it. The first has to do with Hori and Miyamura as a couple, has to do with what each of them likes about the other. Knowing she loves gory horror movies while he's afraid of them, Hori tries to be atypical, pretending to be scared. And it backfires like it only could with these two. Which leaves Hori upset that she's not like "normal girls." Which leads to Miyamura saying he doesn't like "normal girls," he likes Hori just the way she is. And Hori likes Miyamura the same way. It all culminates in them having a moment in Hori's bedroom, and considering both are soon seen without their shirts on, it seems like a rather serious moment for the two of them. Like they've reached another step in their relationship. But considering the overall comedic tone of the series, I wonder if this is how far it'll go in terms of the physicality of their relationship.

The second moment is during a dream of Miyamura's, when his current self comes across his younger self during those dark middle school days. The days when he had no friends, when classmates would bully him, when he'd have no one to stand up for him. The days when he wanted to die. But the current Miyamura tells him that it will get better, that he will have friends and won't mind being loud and having fun. That there's someone out there who'll be there at his side, someone who will be everything to him as he will be to them. If only he waits a little longer. It's another serious moment, one that highlights how depression and suicidal thoughts don't care how old you are, how they can overwhelm you. How kids can be intentionally cruel and dismissive. How things do get better, when you find the strength to let people in.

The series continues to give readers more of the same. More awkward teens, more comedic moments, more Hori and Miyamura navigating their relationship. I do wonder if there'll ever be a mix-up, if things will ever drastically change, but I doubt it. I think it'll continue to be a feel-good slice of life series, a mixture of sad and sweet moments during their high school days.