Me on Suitors and Sabotage 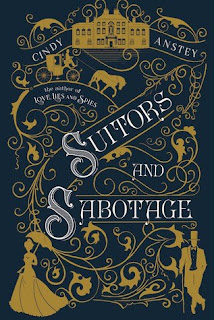 Shy aspiring artist Imogene Chively has just had a successful Season in London, complete with a suitor of her father's approval. Imogene is ambivalent about the young gentleman until he comes to visit her at the Chively estate with his younger brother in tow. When her interest is piqued, however, it is for the wrong brother. Charming Ben Steeple has a secret: despite being an architectural apprentice, he has no drawing aptitude. When Imogene offers to teach him, Ben is soon smitten by the young lady he considers his brother's intended. But hiding their true feelings becomes the least of their problems when, after a series of "accidents," it becomes apparent that someone means Ben harm. And as their affection for each other grows—despite their efforts to remain just friends—so does the danger...

Suitors and Sabotage is a gentle tale of mystery and intrigue, of friendship and romance, of side-long glances and pondered-over thoughts and wondering and wondering without asking important questions in order to keep feelings from being hurt.

Imogene is bright and creative, well-skilled and well-versed in art. So much so, she's hoping to one day start an art school. But unfortunately for Imogene, her father has other plans for her. Like a possible engagement to a rather suitable young man. A young man Imogene isn't necessarily interested in. Ben is quick and charming, knowledgeable and interested enough in architecture to be an apprentice to a good architect. But skilled at the art of drawing? Not so much. Luckily enough, he's accompanied his older brother Ernest on a visit to a particular young woman's house, a young woman that Ernest is rather interested in on a personal level. Ben as well, after getting to know her, after discovering she can teach him to draw. But is that all there is between them? Interesting conversation and drawing lessons?

It's a rather sweet, easy-going book, much like the author's previous books. The charm of the English countryside and Regency-era manners and manor houses. The mistakes and misunderstandings that occur when thoughts are thought over and over again but rarely spoken aloud. Random mishaps that bring people together. Definitely a must-read for fans of the author and those looking for more sweet historical romance YA.