Me on Reign of the Fallen 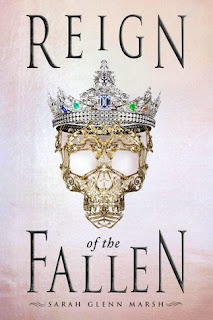 Odessa is one of Karthia's master necromancers, catering to the kingdom's ruling Dead. Whenever a noble dies, it's Odessa's job to raise them by retrieving their souls from a dreamy and dangerous shadow world called the Deadlands. But there is a cost to being raised--the Dead must remain shrouded, or risk transforming into zombie-like monsters known as Shades. If even a hint of flesh is exposed, the grotesque transformation will begin. A dramatic uptick in Shade attacks raises suspicions and fears among Odessa's necromancer community. Soon a crushing loss of one of their own reveals a disturbing conspiracy: someone is intentionally creating Shades by tearing shrouds from the Dead--and training them to attack. Odessa is faced with a terrifying question: What if her necromancer's magic is the weapon that brings Karthia to its knees?

Reign of the Fallen is mysterious and eerie. With magic and danger at nearly every turn, Odessa is haunted by more than the prospect of someone forcing the Dead to attack the living.

Odessa's is a curious voice. Practical and determined, a little sweet and thoughtful, and as time goes on, full of an angry sorrow. She knows her place as a necromancer, embraces it, knows she is secure in her place as one of the few desperately needed in order to keep King Wylding ruling over Karthia. Bringing him back from the dead. She knows her place with Evander, partner and boyfriend. But when the Dead begin to go missing, when the Dead are turned into Shades and turned on Odessa and the other necromancers, it feels like everything has gone wrong. Like the world is falling apart around her. Like she is falling apart.

Initially, I was rather intrigued with the necromancy part of the book and the reason for it. The Dead that continue to rule over Karthia, the mystery surrounding the Shades and their attacks. But then I saw part of the book as an exploration of grief. The sorrow we feel when a loved one dies. The claims we make, as if anything we do could bring them back. In Karthia, they can come back, at a cost to both the living and the dead. But what is the cost when it could reunite loved ones, parents or partners? What is the cost when it reunites parents and children, kings and subjects? And what is the cost, even with a necromancer's magic, when the dead cannot return? I enjoyed this so much, this story of magic and death, of family, of grieving and acceptance. I would recommend this to fantasy YA readers looking for something different, because this certainly felt different. The treatment and process of the necromancer's abilities, the different ways of grieving, the twists and motives behind the rising of the Shades. I'll be keeping an eye out for any more books set in this world.