Me on Defy the Worlds 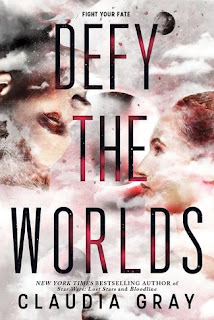 Shunned after a trip through the galaxy with Abel, the most advanced cybernetic man ever created, Noemi Vidal dreams of traveling through the stars one more time. And when a deadly plague arrives on Genesis, Noemi gets her chance. As the only soldier to have ever left the planet, it will be up to her to save its people... if only she wasn't flying straight into a trap. On the run to avoid his depraved creator's clutches, Abel believes he's said good-bye to Noemi for the last time. After all, the entire universe stands between them... or so he thinks. When word reaches him of Noemi's capture by the very person he's trying to escape, Abel knows he must go to her, no matter the cost. But capturing Noemi was only part of Burton Mansfield's master plan. In a race against time, Abel and Noemi will come together once more to discover a secret that could save the known worlds, or destroy them all.

Defy the Worlds is a return to characters flawed and familiar and a journey through time. Even though Noemi and Abel are apart, there are still forces at work around them. Forces determined to see their plans through, to survive no matter the cost. The two will have to come together if they want to see a world saved and secrets revealed that could turn the tide of war.

After their time together, racing from planet to planet, coming to terms with their missions, their humanity, Noemi and Abel are apart. Noemi is back on Genesis, continuing her time as a soldier in order to keep it safe in the long war with Earth. Even if she still feels uncomfortable, even if other soldiers around her no longer trust her. See her as a liability. She's back, turning everything she saw, everything she went through over and over in her head. Abel is traveling the stars with a rather sparse Vagabond crew of two, keeping them under the radar. Keeping himself hidden from his creator, Burton Mansfield. The aging genius who would have Abel's mechanical body as a place for his own mind when his body finally gives out. But Abel's discovered his humanity, his desire to stay alive, to stay himself. He will do whatever it takes to stay hidden, and in turn, keep Noemi safe. But then he receives word that Noemi has been kidnapped, and Abel must find the man he's been hiding from.

In this second book, the picture is expanding. It's still Noemi and Abel, their motivations and their missions, their humanity and their determination. But other forces are at work. Burton Mansfield and his daughter Gillian, they have their plans for the future. Plans that rely on certain things, like secrecy. Like Abel. So much is revealed in this book, things only hinted at in the first. Abel's newfound humanity and individuality continue, this artificial being discovering what it is both to be alive and be the only one. What I enjoy is seeing Noemi and Abel continue to be different people, Noemi's soldier training and headstrong ways alongside Abel's predictions and practicality and curiosity when faced with the possibility that he might not be alone. But both will do whatever it takes to keep the other alive and safe. After the ending, I'm desperate for the next, to see what will happen and what it will cost the both of them.

(I received an advance copy of this book to review from Hachette Book Group Canada.)
Posted by Lindsay at 4:00 AM