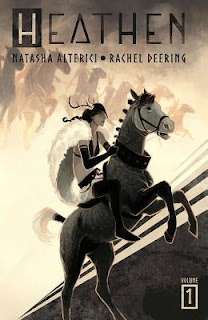 Aydis is a viking, a warrior, an outcast, and a self-proclaimed heathen. Aydis is friend to the talking horse Saga, rescuer of the immortal Valkyrie Brynhild, and battler of demons and fantastic monsters. Aydis is a woman. Born into a time of warfare, suffering, and subjugation of women, she is on a mission to end the oppressive reign of the god-king Odin.

Heathen Volume 1 is powerful and determined, furious and full of intent. It's the beginning of a mission, of an epic quest that will take Aydis all the way up to the king of the gods.

Aydis is focused, full of sorrow and rage. Sorrow that her village would cast her out and rage at the laws of the land. Laws that subjugate women, keep them in their homes, bind them to the wishes of first their fathers and then their husbands. But what about women like Aydis? Women who would rather hunt or lead? Women who would not marry a man, who would rather kiss and love another woman? And so begins Aydis' epic quest. To first rescue the trapped Valkyrie queen Brynhild, an immortal with her own past, her own secrets, and then to seek out the god-king Odin. To bring her grievances to him.

The artwork is amazing. Rough and sketchy at times, detailed and expressive at others. The different faces of Aydis, alternating between determination and worry, surprise and sorrow. The laughing faces of the wolves Skull and Hati as they debate over when they think the world will end. The stoic Saga. The fury and resolve of Brynhild. The allure and charm of Freyja. As much as I like Aydis as a character, her complications and her fury, I love Alterici's art style, the shapes of the characters and the at times muted winter colouring.

This is certainly a story I've been waiting for, something steeped in Norse mythology involving warriors and the Valkyrie but with a twist. With attempts at righting the historical wrongs of prejudice and sexism. It's the story of a young woman who wants more out of what her options are, who wants what she wants, wants to love who she loves without being cast out or aside, and how far she will go. I'll definitely be keeping an eye out for more, either in the collected volumes or in single issues.

(I downloaded an e-galley of this title from Diamond Book Distributors through NetGalley.)
Posted by Lindsay at 4:00 AM