Me on The Epic Crush of Genie Lo 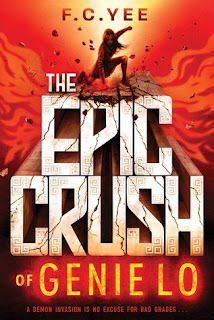 The struggle to get into a top-tier college consumes sixteen-year-old Genie Lo's every waking thought. But when her sleepy Bay Area town comes under siege from hell-spawn straight out of Chinese folklore, her priorities are suddenly and forcefully rearranged. Her only guide to the demonic chaos breaking out around her is Quentin Sun, a beguiling, maddening new transfer student from overseas. Quentin assures Genie she is strong enough to fight these monsters, for she unknowingly harbors an inner power that can level the very gates of Heaven. Genie will have to dig deep within herself to summon the otherworldly strength that Quentin keeps talking about. But as she does, she finds the secret of her true nature is entwined with his, in a way she could never have imagined…

The Epic Crush of Genie Lo is a story full of action, intensity, and reality. A combination of fighting, Chinese folklore, and the pressure weighing down on Genie's shoulders to get into a top college before high school is over.

Genie is driven. Not necessarily angry but certainly frustrated at times. She knows what she wants out of her future and has everything planned. Top grades leading to top schools leading to getting out of the Bay Area. She knows she'll have to work impossibly hard in order to get out. But then Quentin Sun falls into her life, pushy and demanding, and turns everything around. Revealing that he's an important figure in Chinese folklore and stories, revealing that Genie herself has mystical abilities. Revealing that demons are coming for them, demons she doesn't have time to deal with if she wants to get into Harvard or Yale. And so comes Genie's battle to keep her lives apart while she and Quentin try to save unknowing citizens from becoming demon food.

What struck me, as a white reader, was the pressure weighing down on Genie as a Chinese-American girl. The pressure to get prefect grades, to stand out among all the other Asian applicants sending essays to top universities. The pressure from her mother to not stand out, to listen and behave, to be proper, to be nice to boys that show interest. The uneasiness she feels in her own body, how she dislikes being a tall Chinese girl. In no way can I attest to the authenticity of Genie's personal life or experiences, that is for other Chinese-American and Asian-American readers to speak on, but it certainly felt real to me. Her worries and wants dripped from the page.

This book is a great mixture of action and real life. Genie's struggle is very real, her desire to get good grades to get into a top university at war with her given mission to stop the sudden demon invasion. Things are never easy for Genie, so rarely is she given a break. I would recommend this to so many readers, so many teens like Genie worried about the future while struggling through their present, fighting against some expectations while trying to live up to others.

(I downloaded an e-galley of this title to review from Amulet Books through NetGalley.)
Posted by Lindsay at 4:00 AM