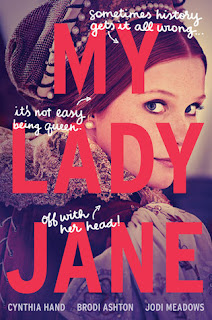 For fans of The Princess Bride comes the comical, fantastical, romantical, (not) entirely true story of Lady Jane Grey.

Lady Jane Grey, sixteen, is about to be married to a total stranger—and caught up in an insidious plot to rob her cousin, King Edward, of his throne. But that’s the least of Jane’s problems. She’s about to become Queen of England. Like that could go wrong.

This sounds intriguing. I rather like British history, even though there's a lot of present day paranormal and futuristic dystopian that might say otherwise, and so I'm curious as to how the authors have tweaked the story of Lady Jade Grey. Apart from her horrible death at the age of 16 or 17.
Posted by Lindsay at 12:02 AM

Email ThisBlogThis!Share to TwitterShare to FacebookShare to Pinterest
Labels: historical, Waiting on Wednesday, YA