Me on Da Vinci's Tiger 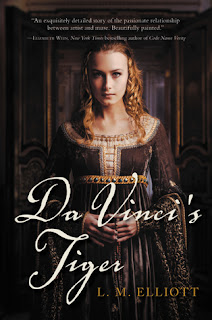 Young, beautiful, and witty, Ginevra de’ Benci longs to take part in the artistic ferment of Renaissance Florence. But as the daughter of a wealthy family in a society dictated by men, she is trapped in an arranged marriage, expected to limit her creativity to domestic duties. Her poetry reveals her deepest feelings, and she aches to share her work, to meet painters and sculptors mentored by the famed Lorenzo de Medici, and to find love. When the charismatic Venetian ambassador, Bernardo Bembo, arrives in Florence, he introduces Ginevra to a dazzling circle of patrons, artists, and philosophers—a world of thought and conversation she has yearned for. She is instantly attracted to the handsome newcomer, who admires her mind as well as her beauty. Yet Ginevra remains conflicted about his attentions. Choosing her as his Platonic muse, Bembo commissions a portrait by a young Leonardo da Vinci. Posing for the brilliant painter inspires an intimate connection between them—one Ginevra can only begin to understand. In a rich and enthralling world of exquisite art, elaborate feasts, and exhilarating jousts, she faces many temptations to discover her voice, artistic companionship, and a love that defies categorization. In the end, she and Leonardo are caught up in a dangerous and deadly battle between powerful families.

Da Vinci's Tiger is an intriguing imagining of a young woman's portrait, a fictional look into her life in Florence and her struggles as a learned woman in a time and place where women had little power.

Ginevra is very aware of her position. She's expected to keep a clean household, to have children, to listen to her husband, and to not shock anyone by speaking intelligently of poetry, art, or of her own thoughts. She's a woman. Why would a woman wish to learn, wish to speak intelligently of her own ideas of the world, of art and poetry and relationships and business? Ginevra is treated like she is less than the men around her, treated more like a horse coming up to the auction block, ready to be sold to the highest bidder. She has no agency beyond the walls of her home, and even then because her husband has left the care of the house and the instruction of the servants to her. But she craves company, the chance to speak with someone about philosophy. She desires an honest connection with someone and she hasn't found it. Men make the decisions for her. At this point in time, she has no say in what she does, where she goes, which man to marry. She resents the men who control her life but she cannot speak up, and so her thoughts build in her mind, waiting for a chance to express themselves. Ginevra waits for the time when she can be herself to the world.

The setting is rich with the glamour of Florence in the 15th century. The people, the commonplace talk of business and money, of friendship and rivalry. The chivalry and the platonic love a man would have for a woman not his wife. It's a curious, to me, concept taken from history, to gaze upon a woman and lavish her with praise, to wax poetic of her beauty and virtue, to love her as a glorious thing upon a pedestal, and to go no further with your affection. It's certainly something rarely seen in the present day. But how interesting is it that a man can value the inner beauty as well as the outer of her Platonic Love while never bothering to actually ask her about her thoughts and feelings. Constantly treating women like objects instead of people.

It's an intriguing tale, yes, a possible history expanding on the portrait Leonardo da Vinci did paint of Ginevra de' Benci. It highlights the plight of women at the time, how they were treated as tools or bargaining chips by many men who thought themselves more powerful simply because they were men. How women were considered property. But perhaps, at one time or another, all women in Ginevra's position proved themselves to be mountain tigers, to be caged but never tamed. THe story moves slowly, following Ginevra is this imagined time in her life. I would certainly recommend this to history fans, to those interested in the Renaissance period, to those intrigued by the real life portrait of Ginevra.