Me on Lost Stars 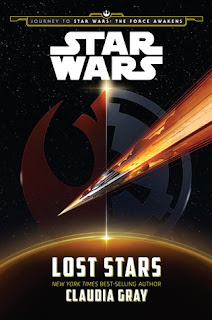 The reign of the Galactic Empire has reached the Outer Rim planet of Jelucan, where aristocratic Thane Kyrell and rural villager Ciena Ree bond over their love of flying. Enrolling at the Imperial Academy is nothing less than a dream come true for both of them. But Thane sours on the dream when he sees firsthand the horrific tactics the Empire uses to maintain its ironclad rule. Bitter and disillusioned, he joins the fledgling rebellion, putting Ciena in an unbearable position between her loyalty to the Empire and her love for the man she's known since childhood. Now on opposite sides of the war, will these friends turned foes ever find a way to be together, or will duty tear them, and the galaxy, apart?

Lost Stars is an exciting adventure across a distant galaxy following two people somehow fated to be together. As much as duty, honour, loyalty, choice, keeps them apart, they seem to find a way back to each other. But with being on either side of a war, are they also doomed?

Thane is full of adventure. Growing up on Jelucan, he couldn't wait to fly, to escape. It's all he's dreamed of, being a pilot for the Empire. Flying every kind of craft he can get his hands on. But the truth is hard to accept. Ciena is filled with honour and respect. Loyalty. She's smart and passionate, strong, and believes in the oath she's taken with every part of her. Well, almost every part. But for her, giving your word is everything. Their different personalities clash repeatedly but they work so well together as children, then in the Imperial Academy. The bold soldier and the moral compass. As much as they work well, their perception of the world, of the Empire, will be different. It makes them human, makes them believable.

For fans of the franchise, this should be a joy to read. Events happen alongside the plots of the films, occasionally meeting and revealing a familiar character or two, and you're sent back to the movies, trying to pick out what point in time it is. Where characters like Luke Skywalker or Princess Leia would be. But it never detracts from Ciena or Thane. This is still their story, their version of the clash between Empire and Rebellion.

While the book is billed as a star-crossed lovers story, and while I've even said that to some extent here, that's not all it is. It's a look at honour and loyalty, at duty and choice. At making those hard decisions and doing what you feel is right, even when someone you've known for years, someone you love, feels differently. It's a brutal look at how war separates and destroys, even when we think we're following a path of good intentions. I would definitely recommend this to Star Wars fans, to those looking forward to the upcoming movie, to those looking for something so in-depth in such a familiar universe. Also, there just has to be another book. It has a proper ending, don't worry, but it can't just end like that.