In My Mailbox is weekly fun hosted every week by Kristi over at The Story Siren. :)

My sister, who's two years younger than me, is graduating from university this June. She's getting an honours degree. In May, she starts a 16-week work period with a professor she's had before funded by the government because she received some undergraduate student research award. She's really smart, my sister, which sucks a bit because it's not hard for me to feel like an idiot, but she's happy. We're really different, but we still do things together. :)

Like this past week. We early-voted on Monday (federal election time in Canada), we went browsing through Ikea (she needs a new desk chair, I'd like another bookcase), and she was nice enough to let me buy her another book for carrying my things a couple weeks ago. ;) She's also been awesome getting stuff for me since I broke my ankle. Feels like it's been forever instead of 10 weeks. *faint* 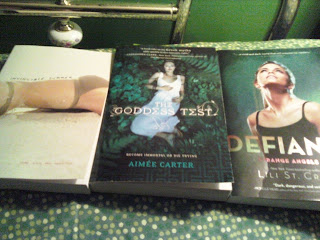 Bought:
The Goddess Test by Aimée Carter
Defiance by Lili St. Crow
Invincible Summer by Hannah Moskowitz (I've read it, I know, but I had to buy it)
Red Mortal by Deidre Knight
Lover Unleashed by J.R. Ward (these last two are two paranormal romance series that I'm addicted to)

Found in the April S&S Galley Grab newsletter:
Blood Red Road by Moira Young
Forbidden by Tabitha Suzuma (I already read it on Friday and it's wrecked my brain)
Possession by Elana Johnson (it's in the Adult eGalley section, if you couldn't find it)
Posted by Lindsay at 12:24 AM

Email ThisBlogThis!Share to TwitterShare to FacebookShare to Pinterest
Labels: In My Mailbox, romance, YA