Me on Gushing About Lilith Saintcrow 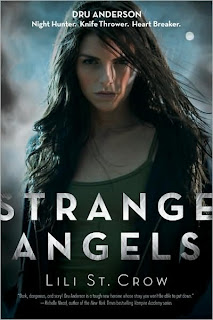 I love urban fantasy/dark fantasy/paranormal books. There's something about real life that can get so boring sometimes, there's something wild and unexpected missing. In urban fantasy novels, that something wild and unexpected is right there, usually hidden in the shadows, creeping around in the background. It makes the book that much more interesting, like real life mixed with something that's bound to keep you on your toes.

If the world-building is done right, then you get totally swept into the book and start to feel like you're right there with the characters, seeing what they see.

That's how I feel whenever I read Lilith Saintcrow's Strange Angels series. There's a bunch of spoilers, so be warned.

This series just sort of found me, too. Early in 2009, I read the first Vampire Academy book by Richelle Mead. That July, I ordered the next two, cause that's all that was out at the time. At the end of Shadow Kiss was the cover and a preview (the prologue) of this book called Strange Angels by Lili St. Crow. I saw the cover and was curious. I read the prologue and fell in book-love. I bought it and for the past 2 years have fallen under Lilith's siren spell.

I think it's the character of Dru that sucked me in. She's not your normal heroine. She knows, and I mean knows, how to fight her way out of a situation or two, she knows her guns and weapons, and she knows a bunch of 'Real World' stuff, like wulfen and faeries and apparitions and the like. She's rough around the edges, she's got a smart mouth, she's punchy like you wouldn't believe. She's awesome. Dru's like Buffy the Vampire Slayer without the blonde hair and cheerleading background and more gruff attitude..

Sure, Dru's not your average girl and could so kick your butt (and knows it), but she's not heartless. She's got a clear sense of right/wrong and she cares about people when they're being pushed around. I think I was waiting a little not so patiently for a girl like Dru who's not all that of a girl and has accepted it. She's not focused on how to find a date while fighting roach spirits or poltergeists. She's focused on how to fight them while hoping her dad lets her come along on a hunt or two.

Dru knows the world is dark and creepy. There's a distinct lack of perfect in the Real World, as there should be. Her mom was killed, her grandmother died, her dad turned into a zombie, she just discovers she's part-vampire, and there's a different super creepy evil vampire after her who wants to kill her. There's no sugar-coating whatsoever, even when Graves drops into her life with his aspirations of being a physics professor (which is so cool) and ends up being turned into a loup-garou.

I also think the whole djamphir and svetocha idea is different and intriguing. Vampires can be written about forever and ever, but a world where female vampires are really really rare? Where they're a little more than average until they 'bloom' and become strong and pretty? And they're poisonous to evil vampires just being in the same room as them? That's wicked. In a cool, creepy vampire way. ;)

There's just something about these books, especially the first one, that makes me want to read it over and over and over again. Thank God these books exist (and that they're in paperback). I so wish I'd written this series. 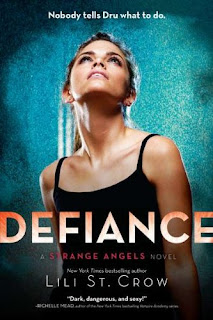 The different characters are so fleshed out and so close to being real. Dru with the huge chip on her shoulder, Graves and his sense of humour mixed with his ability to roll with all the punches, Christophe's need to protect Dru plus a little vampire creepiness. Ash. I love Ash. I could happily devour a new series all about Ash. He's the broken lost soul Dru has to fix right before she fixes her own broken lost soul.

For all her strength and knowledge and determination and blood-boiling anger, Dru's still fragile.

I finished reading Defiance today (May 5, review to be posted May 10), and after reading nothing but these books for the past 3 days I feel like a junkie coming down from an amazing high. It was like a bomb went off in my head and obliterated everything but (spoiler) Dru, Graves, and Ash. I didn't want it to end. I wanted to keep reading. Once I was done, I went back and read the ending because it was so good. I still don't want to book to be over because I know I'll be counting the days until Reckoning.

I want to punch myself in the face for not writing these books before Lilith Saintcrow did.

I can't believe the series is coming to an end with Reckoning due to come out November 1, 2011. It almost feels like the end of a weird and dark and dangerous era of a couple of years. Even if there's no more Dru and Graves and Christophe, the piece of my soul that loves how Lilith Saintcrow writes and world builds and makes me want to hug these books to sleep would cry for joy if there's ever another book or series set in the same world.

That would be spectacular.

It doesn't seem like I've gushed nearly enough about this author and this series and these characters, but what else can I say? Besides go out and buy these books if you've been looking for a flawed and fragile but still amazingly strong heroine. ;)
Posted by Lindsay at 12:23 AM

Email ThisBlogThis!Share to TwitterShare to FacebookShare to Pinterest
Labels: paranormal, vampire, werewolf, YA