Me on Die for Me 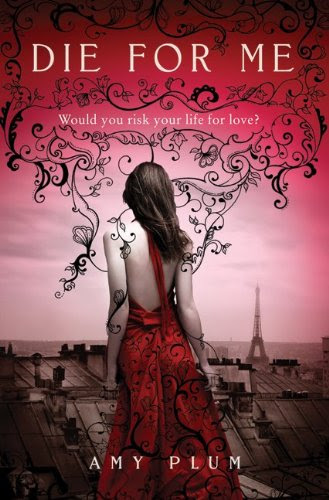 Amy Plum's debut novel, Die for Me, weaves together a mysterious and sweetly romantic story with the magnificent city of Paris and a secret group of people fated to sacrifice themselves time and time again to save others. An intriguing twist on a classic character, Plum's Revenants turn the undead into saviours, into helpers, into cute boys to crush on, and Kate is soon swept off into their world.

Kate's life was normal, but then her parents died and she and her sister move to Paris to live with their grandparents in an attempt to get away from the bad memories. Broken and alone, Kate doesn't see life getting any better. Until she meets Vincent, who sweeps her off her feet. Who isn't normal. Who has enemies trying to kill him.

The premise sucked me in. I love stories about old cities like Paris or London or Rome. There's something about novels that take place outside of North America and in Europe that give it an old world mysterious historical feel. Cities that are hundreds of years old, that have so mush history in them and hidden underneath them, sometimes turn into characters themselves, silent narrators guiding the main characters through its shadows and secrets.

Kate almost needs Vincent to show up in her life and mess it all up. She's stuck in a rut, stuck in a huge pit of sadness and despair, and needs Vincent to show up, freak her out, and pull her back out into the real world. Losing both your parents at a teenager clearly sucks, and clearly Kate's self-preservation kicked in big time so she wouldn't lose anyone else she cared about, but she still had to live her life.

Even if Vincent is the one to start to draw her out of her shell.

But she's still damaged. It's good that she's not just instantly cured by Vincent, that Plum still has Kate be all partially emotionally unavailable. It makes Kate more realistic, more human, more believable as a character. Meeting a cute French guy doesn't completely fix all your emotional problems and get over your 'don't let anyone get too close because they might leave me before I'm ready' issues.

Immortality isn't always a good thing. Sometimes, it really sucks. Especially when you're not and the guy you think you might be in love with is.

If you're looking for the softer, more romantic, and less flesh-eating side of the undead but still want some mystique and hints of danger and suspense, then you'll love Die for Me. It's an entertaining mix of YA romance with paranormal/urban fantasy twist in one of the most magical cities.

(I received this book through NetGalley from HarperCollins for the sole purpose of reviewing it. I have not been compensated in any way.)
Posted by Lindsay at 12:02 AM

Email ThisBlogThis!Share to TwitterShare to FacebookShare to Pinterest
Labels: book review, paranormal, YA