Me on Ruin of Stars 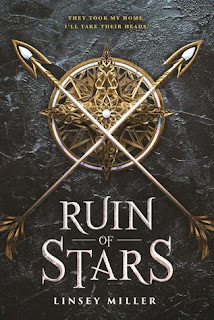 As Opal, Sal finally has the power, prestige, and most importantly the ability to hunt the lords who killed their family. But Sal has to figure out who the culprits are before putting them down. Which means trying to ignore the fact that Elise is being kept a virtual prisoner, and that the queen may have ulterior motives. And the tales coming out of north are baffling. Talk of dark spirits, missing children, and magic abound. As Sal heads north toward their ruined homeland and the lords who destroyed everything, they learn secrets and truths that can't be ignored.

Ruin of Stars is a conclusion to a mission full of revenge and anger, a search for the truth and those who would plot to destroy so many lives.

Sal, now Honorable Opal, in service to the Queen of Igna, is ready to carry out their plan. Hunt down the lords that brought about the destruction of their home country of Nacea. The death of their family. The capture of Elise. Sal may be full of guilt, guilt at surviving and not seeing the traitors until it was too late, but they're also full of determination. They will not rest until all the names on their list is crossed out, until the truth is revealed, until all the innocents are saved. Even if it kills them.

A big part of this book, something that isn't hidden or whispered about, something that's discussed openly and thought about long and hard by Sal, is destroying Erlend's way of thinking. Their way of treating people. The strict confines of the male/female binary, the belief that men are smarter and better at leading and commanding than women. It's a way of thinking that looks at inclusion and acceptance with disgust, a way of thinking that tells people they're wrong, that something in wrong with them, and that there is only a binary when it comes to gender, only a male romantic partner to consider when you're female. For Sal who considers themself genderfluid, who shifts back and forth and in-between, for Elise who would rather court other girls, or for Emerald who feels no romantic attraction toward her partners, this way of thinking hurts in so many ways. Sal phrases their feelings about Erlend and their restrictive way of thinking so well: "Their comfort was more important than [Sal's] existence." Those like Sal, like Elise or Emerald or Lark, are seen as less than people, less than human, seen as something broken and in need of fixing, and that kind of thinking is horrific and wrong.

How far will revenge take you? How much will it fuel you, push you towards an end drenched in blood and despair? What will become of you when you reach the end, when all those who wronged you are dead at your feet? What will become of Sallot Leon, of Honorable Opal, when their list no longer has any names on it? I thoroughly enjoyed reading this duology of identity and discovery, of pain and sorrow and revenge, of despair over close-minded ways and hope for the future.