Me on The Adventure Zone: Here There Be Gerblins 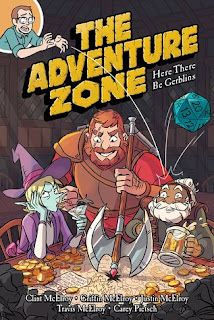 Welcome to the Adventure Zone! SEE! The illustrated exploits of three lovable dummies set loose in a classic fantasy adventure! READ! Their journey from small-time bodyguards to world-class artifact hunters! MARVEL! At the sheer metafictional chutzpah of a graphic novel based on a story created in a podcast where three dudes and their dad play a tabletop role playing game in real time! Join Taako the elf wizard, Merle the dwarf cleric, and Magnus the human warrior for an adventure they are poorly equipped to handle AT BEST, guided ("guided") by their snarky DM, in a graphic novel that, like the smash-hit podcast it's based on, will tickle your funny bone, tug your heartstrings, and probably pants you if you give it half a chance.

The Adventure Zone: Here There Be Gerblins is full of impossible hijinks and an oddball trio running wild in classic fantasy-setting encounters. Magic and swords, treasure and gerblins, this is the beginning of a grand adventure

Taako is the ever snarky and always sassy wizard, Magnus is the friendly and ever-proficient fighter, and Merle is the sometimes grumbling, sometimes preaching cleric. Somehow, these three characters have come together to form adventuring party. They all have different personalities, different backstories, different motives. And yet here they are, adventuring along. Their interactions with each other are often full of bickering, but they barely know each other and sometimes one of them (Taako) can be a little abrasive. There are bound to be bumps along the road. Plus, every so often, their all-seeing and all-knowing Dungeon Master pops in for some insight, explanation, or some snark of his own.

The art style is just perfect, Carey Pietsch nailed it. Magnus being all big and full of both muscles and smiles. Merle looking like a crabby dwarf cleric, spreading the good word with flowers in his hair. Taako with that near-constant frown furrowing his brow, the crooked point in his hat, the smile on his face when he talks about his cooking show. Plus all the outside landscapes and the cave interiors, the cartoony monster killing.

What this is is something new, something different. Something exciting. It's a graphic novel adaptation of a wacky and hilarious Dungeons & Dragons podcast. It's gone from paper to audio back to paper with full colour pictures, which is rather interesting. D&D is becoming pretty popular as something to watch, as something with complicated characters and missions and making the best of a bad situation because of bad dice rolls. The book feels more streamlined than the podcast (I've only listened to the first couple of story arcs), more fluid and faster-paced. No mention of dice rolls or rules or limitations on spell-casting. Now, by no means do you have to have listened to the podcast before reading this, or after, and you're not required to read this if you've already listened to the entire campaign and know how it'll all end. Having both options gives it layers, makes it deeper, makes it more. Some things are different, some names and some of the actions, but the heart of the story is still the same. It's still three dorks adventuring their way, collecting objects and finding secrets while Griffin describes the rich tapestry they just blasted their way through without waiting to see if they were walking into a trap. If you're a fan of the podcast, or D&D podcasts or live shows in general, odds are you'll love this. And I'd definitely give it a read if you're interested in D&D or fantasy comics. It's just so much fun, and if they do more books, the fun's only going to continue.