Me on The Unbinding of Mary Reade 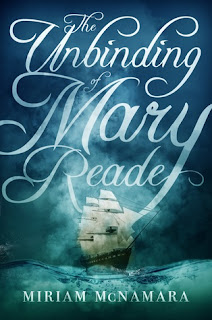 There's no place for a girl in Mary's world. Not in the home of her mum, desperately drunk and poor. Not in the household of her wealthy granny, where no girl can be named an heir. And certainly not in the arms of Nat, her childhood love who never knew her for who she was. As a sailor aboard a Caribbean merchant ship, Mary's livelihood—and her safety—depends on her ability to disguise her gender. At least, that's what she thinks is true. But then pirates attack the ship, and in the midst of the gang of cutthroats, Mary spots something she never could have imagined: a girl pirate. The sight of a girl standing unafraid upon the deck, gun and sword in hand, changes everything. In a split-second decision, Mary turns her gun on her own captain, earning herself the chance to join the account and become a pirate alongside Calico Jack and Anne Bonny. For the first time, Mary has a shot at freedom. But imagining living as her true self is easier, it seems, than actually doing it. And when Mary finds herself falling for the captain's mistress, she risks everything—her childhood love, her place among the crew, and even her life.

The Unbinding of Mary Reade is a story of pirates and longing, of adventure and fear, of discovering who you are and being true to that self, even if it puts you in harm's way.

Mary is kind and smart, but lost and lonely. Made to live as a boy for most of her life, she's torn as to what her place in the world will be when she gets older. How is she supposed to continue the charade of being a young man as time goes on? Things are expected of young men once they reach a certain age. And so she runs off with her friend Nat, who only ever knew her as Mark, and they turn to a life on the high seas. But when things go wrong and they end up separated, she wonders what will happen next. Until she sees pirates attack their ship. Until she sees a girl with the pirates, skirts and all with a pistol raised, and Mary knows what to do next. What follows is Mary's hard realization that it isn't so easy, being a woman pirate, and the chance to risk everything for what Mary truly wants in life: to be herself with someone she loves.

It's a rather unconventional sort of story, but then both Mary Reade and Anne Bonny are unconventional young women for the time period. Posing and dressing as a young man, fighting alongside men as pirates and thieves. This is not what proper God-fearing young women did. But what choice did they have? Forced into marriage or worse, unable to be in control of their lives or their futures. After living years as a boy, Mary can't see herself living as a young woman should. Quiet and demure, her opinion given little to no weight. Property of her husband. She's lived a mostly free life as a young man, seen what happens to young women when they're beaten and abused. What's she supposed to do? Keep her head down? Or fight to live the life she wants? This is a work of fiction, but Mary Reade and Anny Bonny were real pirates, real women fighting in a male-dominated space. I'd certainly recommend this to those looking for stories about Mary and Anne that lean more towards the romantic side of their relationship and not so much the piracy.

(I received an e-galley of this title to review from Thomas Allen & Co.)
Posted by Lindsay at 4:00 AM