Me on How We Roll 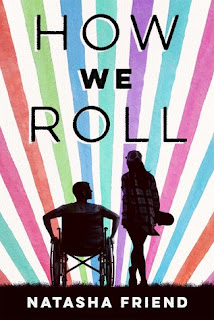 For Quinn McAvoy, losing her hair the summer before eighth grade was the beginning of the end. Suddenly she was Pluto: a has-been planet, too dwarf-like and unimportant to hand with the other celestial bodies. But Quinn gets a second chance when her family moves across the country a week before her freshman year. No one in Gull's Head, Massachusetts, knows that Quinn has alopecia, the autoimmune disorder that took the hair she had never really thought about-until it was gone. No one knows that the wig she's wearing isn't her real hair. All Quinn wants is to blend in with the crowd. When the popular girls mistake her for one of their own, Quinn plays along, until a boy in a wheelchair who's been hurt even more than she has turns Quinn's carefully constructed world on its head.

How We Roll is a kind and open story about healing, about struggle, about illness and disorder and understanding. About perception and differences. About honesty and learning.

Quinn didn't have much hope but she does now, after moving across the country from Colorado to Massachusetts. Here's a fresh start for her family, for her brother and his new school that will help them all learn to better understand his autism and his needs, and for Quinn. No one at her new school will know what happened to her. How she lost all her hair and wears a wig when she goes out. How kids at her old school made fund of her, called her names, and how her old friends slowly ditched her. Here in Gull's Head, she's made new friends, she's fitting in when some of the popular freshmen girls start talking to her. But then she comes across Nick, moving through the school in a wheelchair, and she wonders what happened to him. Why he's so sad and so angry.

There's something interesting at play in this book, which is perception, how people see us versus how we want to be seen. Quinn wants to be seen as normal, as one of the girls, but she feels awkward and out of place when she's the only girl in school who wears a wig, who has to deal with it and the itch that races across her scalp. Nick wants to be normal, too. He wants his legs back. But Quinn is able to hide under her wigs. Nick can't, and so Quinn sees a deeper side to being out of place. But they're still teens, still kids with hopes and dreams and likes and dislikes and snarky moments. They're still learning, growing, and still fragile when someone stares. Sometimes friends will accept and sometimes friends will be jerks. Sometimes families are complicated. But we all keep moving forward in some way. I'd recommend this to younger YA readers, middle grade readers making the transition, as Quinn's voice came across as a little young for YA (which would make sense, her being a freshman in high school in the US would make her 13 or 14).