Me on Your One & Only 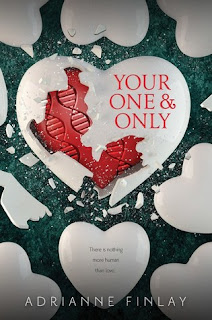 Jack is a walking fossil. The only human among a sea of clones. It’s been hundreds of years since humanity died off in the slow plague, leaving the clones behind to carry on human existence. Over time they've perfected their genes, moving further away from the imperfections of humanity. But if they really are perfect, why did they create Jack? While Jack longs for acceptance, Althea-310 struggles with the feeling that she's different from her sisters. Her fascination with Jack doesn't help. As Althea and Jack's connection grows stronger, so does the threat to their lives. What will happen if they do the unthinkable and fall in love?

Your One & Only is slightly haunting. It's a future of order and perfection built on the need to survive and the sacrifices of humanity. But there will always be consequences in the search for perfection.

Jack is alone, the only human being in a city of clones. The only one without a pre-destined role. The only one who knows music. The only one with asthma. Compared to the others, he is as flawed as possible. Unpredictable. Then why did they create him? What is the reason behind his existence, when they despise him so much?

Althea-310 is like all the other Gen-310 Althea clones, like all the Althea clones before her. Apart from the scar around her wrist, the sign that she wasn't grown perfectly and needed a replacement hand, she's indistinguishable from her sisters. But she still feels out of place. A little distant from the others. Jack intrigues her, he isn't like any of the other clones. Because he's human. There's only one of him. And so many of the other clones hate him. But when strange things start to happen around them, Althea-310 doesn't understand why the Council is quick to blame Jack. Why they're so eager to name him as the cause of their problems. Why they're keeping so many things secret from the others.

This book takes the human condition and strips it out of the clones, leaving behind genetically-altered beings who function without impulse, creativity, or affection. They fill roles destined for them, designed for them. And then they bring in Jack, with all his human emotions and imperfections and perceptions, and the clones don't know what to do beyond ridicule him and shun him. Anything that isn't them they hate. But they're crumbling at their cores, not knowing or caring that what they need is to return to those human flaws. There were a few parts that I wasn't so sure about, like why there was such cruelty aimed towards Jack. Why have clones with their genes altered in order to eliminate disease but still have them know hatred and violence? I don't think this really became the story I was expecting, but I imagine others might enjoy it, those intrigued by futures and questions about humanity raised in Cloud Atlas or Never Let Me Go.