Me on The Door in the Alley 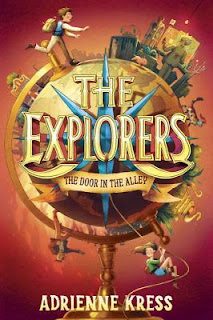 Knock once if you can find it but only members are allowed inside. This is one of those stories that start with a pig in a teeny hat. It's not the one you're thinking about. (This story is way better than that one.) This pig-in-a-teeny-hat story starts when a very uninquisitive boy stumbles upon a very mysterious society. After that, there is danger and adventure; there are missing persons, hired thugs, a hidden box, a lost map, and famous explorers; and there is a girl looking for help that only uninquisitive boys can offer.

The Door in the Alley is humourous and exciting, a journey It's a curious mystery surrounding a secret society and their mission to explore, and a small group that was once cast out.

Sebastian is a very smart young man. He's studious, logical, and loves to have everything planned out. Because logic is the way to go. But then a little pig in a teeny hat wanders into his life and he discovers The Explorers Society. And it unnerves him in a way. It makes him want to know more, know what they explore and what lies beyond their front door. Even though it doesn't quite make sense to him. Logically. Evie is a lonely young girl. Orphaned because of a terrible accident, she's left without anyone to care about her, to love her and support her. She just wants somewhere to belong. One night, after a sudden attack and narrow escape, she's given a letter and sent to a place that might be able to help her. A place called The Explorers Society. It's there she's ignored, there she meets Sebastian, and there she learns she might still have family somewhere. And so the two of them join together to uncover their whereabouts, but they're not the only ones looking.

This was part adventure, part puzzle-solving, and part kids figuring out the world around them. I found myself laughing so much, at the introduction of the pig in the teeny hat, at so many things Sebastian discovers while tidying the inside of the Society building. It reminded me of books like Chasing Vermeer and The Shadow Cipher but faster paced and a little more light-hearted. I would definitely recommend this to those looking for adventurous middle grade books like the ones previously mentioned.