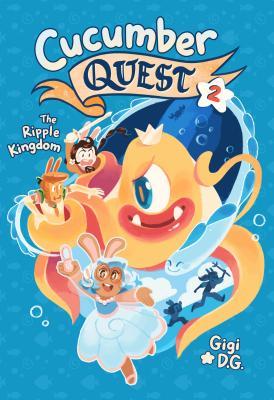 The quest to save Dreamside continues! After a surprise attack at sea, Cucumber finds himself in the Ripple Kingdom, home to white sand, blue waves . . . oh yeah, and the giant, terrible squid monster holding Almond and Sir Carrot captive. Can our so-called "legendary hero" rescue his companions from the nefarious Splashmaster?

Good thing Princess Nautilus is here! With her wit, charm, and positive attitude, there's no way they can lose. But saving the day won't be as simple as it seems once a 500,000-year-old secret comes to light . . .

Adapted from the popular webcomic series of the same name, Cucumber Quest: The Ripple Kingdom is the second book of a clever, adorable, and hilarious four-volume heroic adventure that is sure to make you hungry for sweets and action.

If you're looking for more kid-friendly comics, and by kid-friendly I'm talking all-ages, then check out Cucumber Quest. It's bright and fun and all about mysteries and puzzles and being who you want to be instead of what others want you to be.
Posted by Lindsay at 12:02 AM