Me on The Speaker 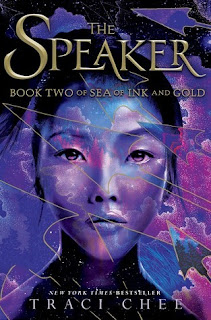 Having barely escaped the clutches of the Guard, Sefia and Archer are back on the run, slipping into the safety of the forest to tend to their wounds and plan their next move. Haunted by painful memories, Archer struggles to overcome the trauma of his past with the impressors, whose cruelty plagues him whenever he closes his eyes. But when Sefia and Archer happen upon a crew of impressors in the wilderness, Archer finally finds a way to combat his nightmares: by hunting impressors and freeing the boys they hold captive. With Sefia's help, Archer travels across the kingdom of Deliene rescuing boys while she continues to investigate the mysterious Book and secrets it contains. But the more battles they fight, the more fights Archer craves, until his thirst for violence threatens to transform him from the gentle boy Sefia knows to a grim warrior with a cruel destiny. As Sefia begins to unravel the threads that connect Archer's fate to her parents' betrayal of the Guard so long ago, she and Archer must figure out a way to subvert the Guard's plans before they are ensnared in a war that will pit kingdom against kingdom, leaving their future and the safety of the entire world hanging in the balance.

The Speaker is continuing an epic tale of danger, magic, and an attempt at changing destiny. This is a story about fate, about the ways we try to run from it and the ways it surrounds us, making sure we never escape. Because the story's already been written.

Sefia is continuing her journey. A journey towards the truth, towards what the Book shows her. A journey towards penance, towards an attempt at making things right, because the Book has shown her some troubling things. Like early stories of her parents, of their betrayal to the Guard and their thievery. Of their plans, their creations and searches for a boy with a scar. This is her chance to right their wrongs, save the lives of those taken and forced into painful situations. But will it be enough?

Archer is free from the impressors, on the run with Sefia, but the horrors he was forced to do still plague him. Haunt his dreams. So much damage was done to him, him and so many other young boys taken by the impressors, trained to fight to the death for a chance for glory. Along with Sefia and the Book, they can find the impressors. Take them down. Free the other boys. But there are some fights where the bloodlust takes hold and Archer finds it harder and harder to not be who he once was.

As with the first book, I was in awe of this second offering. How it takes books and words and gives them such power, how it makes them such wondrous things with the ability to create and destroy on such an immense scale. Words have power, yes. We see this in our daily lives. But what if we could use words like magic, make the impossible possible? And what if, in order to keep the world from destroying itself, we had to destroy books? Eliminate all words? The tension is building, forces are moving. Searching. Sefia and Archer's story has already been written, it's all somewhere in the Book. It's destiny. But that doesn't mean they can't try everything in order to change it. I can't wait for the next book, to see how it will all turn out.