Hi there! Welcome to one of today's stops on the blog tour for Marissa Meyer's newest book, Renegades! 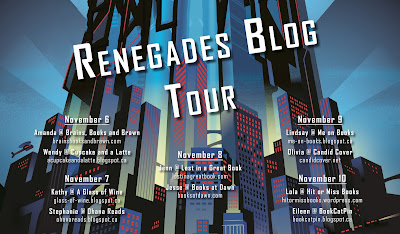 It's all about superheroes, about good and evil and the spaces in between. About what pushes us to help or to hinder. About what makes a hero, what makes a villain. To celebrate Renegades, enjoy this post that has both my review and a question answered by the wonderful Marissa Meyer herself. :) 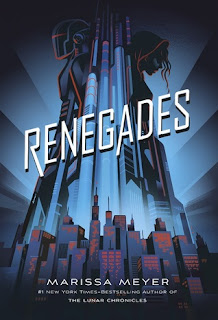 The Renegades are a syndicate of prodigies—humans with extraordinary abilities—who emerged from the ruins of a crumbled society and established peace and order where chaos reigned. As champions of justice, they remain a symbol of hope and courage to everyone... except the villains they once overthrew. Nova has a reason to hate the Renegades, and she is on a mission for vengeance. As she gets closer to her target, she meets Adrian, a Renegade boy who believes in justice—and in Nova. But Nova's allegiance is to a villain who has the power to end them both.

Renegades is thrilling, tense, and oh so complicated. It's all about the duality of good and evil and how there are so many degrees that separate them. Heroes that help and heroes that bully. Villains that destroy and villains that save. And the lengths both go through to uncover the truth. In a world of superheroes and supervillains, secrets are everywhere.

All Nova knows is anger. Rage. Hatred for the Renegades, the supposed heroes of Gatlon City and the world. People have put them up on pedestals for years, calling them champions of justice. But now Nova will get her revenge. Revenge for the little girl she used to be, the one that hoped her family would be saved. Until they weren't. Until the Renegades let her down. Now she's getting close, closer than her and the Anarchists have ever been. But will it be enough for her?

All Adrian knows is the Renegades. All he knows is being a hero, growing up with them and now working alongside them in order to make things right. To make the world better. He's made his mistakes and he's trying to make up for it. He's also trying to find the truth, trying to solve a years old murder, and he's sure the Anarchists have something to do with it. Adrian also sees the inside of the Renegades and has his doubts, doubts about how they're increasingly treated more like celebrities than heroes and saviours. How they're in it for the glamour.

This book is like the superhero movie YA version of V.E. Schwab's Vicious. Heroes and villains and morally ambiguous decisions and harsh realities, no matter the fact that you have superpowers. What's interesting with this book is that with all the action and adventure, the chases and fights, the punches thrown and powers used, there also glimpses into their real lives. Time away from monikers and masks. Time with the faces they make, the sorrows they hold. Renegade or Anarchist, they're still people. Still human beings with fragile human hearts. Considering the twists and turns, the weighty consequences, and the ending, this is certainly the start of an exciting new series.

And here's the question posed to Marissa!


Question: Do you have a favorite character in Renegades?
Marissa Meyer: Honey Harper! (A.k.a. The Queen Bee.) I love a femme fatale character and it was particularly fun writing one that has essentially fallen from grace. She’s melodramatic and over-the-top, but not without her charms, and she has a very specific idea of who she is and what she deserves—riches, luxuries, and comfort. I enjoyed watching how she responds to life in the subway tunnels, and the way she’s attempted to become a mother-figure to Nova (albeit, not a very effective one). I found her to be pathetic at times and vicious at others (though I think more of that viciousness will shine through in Book Two…), and I enjoyed finding ways to bring both sides of her character into the story.

Thanks so much to Raincoast Books for setting up the blog tour and for sending me an ARC to read and review, and thanks to Marissa for the answer to the question. See you all again on the next tour! :)
Posted by Lindsay at 4:00 AM