Me on The Fallen Kingdom 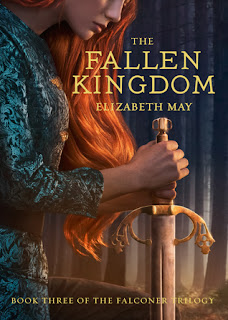 Deep in a forest, Aileana Kameron claws her way out of the earth. Back from the dead with no memory of who she is or what has happened to her, the Falconer now possesses even greater otherworldly powers and a ruthless instinct to kill—and the one piece of knowledge that can change everything. Two fae monarchs, Aithinne and Kadamach, stand on the brink of war, and according to an ancient curse, one must die at the hand of the other or all the worlds will perish. Once, Kadamach was known as Kiaran, and he was mentor, protector, and lover to Aileana. Now, under the grip of the curse, his better nature seems lost forever. Aileana's only hope lies in the legendary Book of Remembrance, a book of spells so powerful that it can break the fae curse and even turn back time. But the book has been lost for centuries, and many are looking for it, including its creator, the Morrigan—a faery of terrifying malevolence and cruelty. To obtain the book and defeat the Morrigan, Aileana must form an unthinkable alliance, one that challenges every vow she has made to herself—even as the powers that brought her to life are slowly but surely killing her.

The Fallen Kingdom is the conclusion to a series steeped in fae magic and blood, danger and destruction. It's the end of Aileana Kameron's story, her journey of hunting and searching, of anger and sadness, and unless she finds what she's looking for, it'll be the end of the world.

Aileana has returned. Somehow. Because she has to save the world from what it has become, and from what it may become. A battlefield, with Kiaran leading one side and Aithinne leading the other, siblings destined to kill each other to keep all the words from collapsing into nothing. With strange and powerful fae magic running through her, Aileana and those she holds close are racing against time, racing to find a book that can turn back curses. But darkness lingers and enemies are everywhere. Enemies ready and waiting to have their own way. But Aileana will not stop. Even if it means her own death. As long as those she cares about are safe.

As always, when a series ends, I find myself looking back on it as a whole. This is a trilogy of magic, of impossibility. Of life and death. Of compassion, redemption, and vengeance. Of the strength we find in ourselves when we are at our most vulnerable. It's lush with hope and sorrow, with connections to those we call friends and family in those darkest hours. I've found it to be an amazing series to read and I couldn't be happier with how it ended.