Me on The Valiant 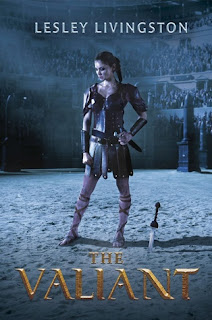 The youngest daughter of a proud Celtic king, Fallon has always lived in the shadow of her older sister Sorcha's legendary reputation as a warrior. But when Fallon was a young child, the armies of Julius Caesar invaded the island of Britain and her beloved older sister was killed in battle. On the eve of her seventeenth birthday, Fallon is excited to follow in her sister's footsteps and earn her rightful place in her father's royal war band. But she never gets the chance. Instead, Fallon is captured by a band of ruthless brigands who sell her to an exclusive training school for female gladiators—and its most influential patron is none other than Julius Caesar himself. In a cruel twist of fate, Fallon's worst enemy, the man who destroyed her family, might be her only hope of survival. Now, Fallon must overcome vicious rivalries, chilling threats and the dangerous attention of Caesar himself to survive the deadly fights that take place both in and out of the arena—and claim her place in history among the Valiant.

The Valiant is dangerous, brutal and complicated. It's about the price of freedom and the holders of power, about survival and kinship. About rivalries and revenge.

Fallon is skilled, determined, furious. Furious at her father for his actions. Furious at the ones who kidnapped her, forced her into slavery. Furious at the Romans she must now serve and entertain as a gladiatrix in a fighting ring. What follows for Fallon is a hard journey, repeated fights and battles for survival and pride. For honour. Because what is honour in this place? In the country of her enemy, in the service of her greatest enemy. If she wants to survive, potentially escape she'll have to watch, learn, train. Bide her time. Wait for the right moment to strike. Even when her nature would make her refuse to bow her head.

There are two things I know I will get from a book by Lesley Livingston: detailed world-building, be they historical or fantastical, and strong female characters. The smell of the dust in the air, the drip of sweat down the back of a neck, the roar of the crowd as they cheer in the area. And the young girls and women, the ways they come together and the ways they fight. In the open with sword and spear, in the shadows with coin and persuasion. I would definitely recommend this to fans of Lesley's previous books and to those looking for more books about young women fighting for what they believe in and refusing to give up.

(I received an advance copy of this title to review from HarperCollins Canada.)
Posted by Lindsay at 4:00 AM