Me on A Conjuring of Light 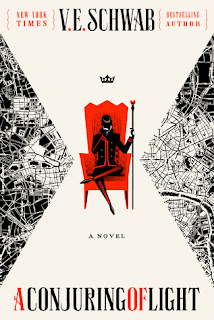 The precarious equilibrium among the four Londons has reached its breaking point. Once brimming with the red vivacity of magic, darkness casts a shadow over the Maresh Empire, leaving a space for another London to rise. Kell, once assumed to be the last surviving Antari, begins to waver under the pressure of competing loyalties. And in the wake of tragedy, can Arnes survive? Lila Bard, once a commonplace (but never common) thief, has survived and flourished through a series of magical trials. But now she must learn to control the magic, before it bleeds her dry. Meanwhile, the disgraced Captain Alucard Emery of the Night Spire collects his crew, attempting a race against time to acquire the impossible. And an ancient enemy returns to claim a crown while a fallen hero tries to save a world in decay.

A Conjuring of Light is a thrilling, heart-wrenching conclusion, full of magic and sorrow. Of mystery and despair, of searching and finding and fearing and loving.

Kell, Lila, Rhy, Alucard. Holland. They're all there. They laugh, they love. They push and pull, they flourish and flounder. They live, they die. They refuse to fall, to kneel to a shadow that calls itself a god and a king.

This book, this series, these worlds are rich with impossibility. With magic and power, with strength and sorrow. With determination and absolute foolhardiness. With heroes and villains, kings and queens and pirates. With myth and legend, selfish thieves and selfless fools. With honour and blood and sacrifice. At the end, after the last page was turned, the last word read, I was left both gutted and filled. This has been a glorious, wondrous series, and I can't want to see where Schwab will take us next.