Me on The Last of August 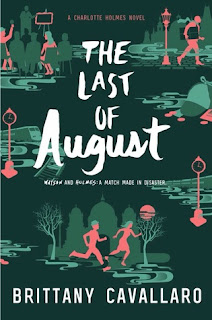 Jamie Watson and Charlotte Holmes are looking for a winter break reprieve in Sussex after a fall semester that almost got them killed. But nothing about their time off is proving simple, including Holmes and Watson's growing feelings for each other. When Charlotte's beloved uncle Leander goes missing from the Holmes estate—after being oddly private about his latest assignment in a German art forgery ring—the game is afoot once again, and Charlotte throws herself into a search for answers. So begins a dangerous race through the gritty underground scene in Berlin and glittering art houses in Prague, where Holmes and Watson discover that this complicated case might change everything they know about their families, themselves, and each other.

The Last of August is a mystery wrapped in complication, a race across Europe and a search for answers. A coming together of old friends and old foes, a maze of motives and reasons.

Jamie is still struggling to understand Charlotte Holmes. Sometimes he thinks he has her figured out, but then she does something, says something, and he's left confused. He wants things to go back the way they were. He wants to know how to fix things, how to fix Holmes, but it's not going to happen. She needs to be who she is. Not everything can be fixed. But can he leave? He's in pretty deep now. And after all he's seen, does he want to leave?

Under the genius of Charlotte Holmes is a complicated, bruised young woman. Trying to navigate her life around someone who wants her dead, around her distant parents and her controlling brother. Around her own demons that appeared after she was raped. She wants Watson close, she knows she needs him around, but she worries if she can give him what he wants. The brief chapters told her point of view are a gold mine for this train of thought.

I was so curious as to where this book was going to go, what trouble Holmes and Watson would get themselves into. But because so much is layered in doublespeak and mystery, I do wonder how much I missed while reading. How much I missed of the mystery, of the moments when Holmes would piece it together. After that ending, after everything that was said and revealed in this book, I'm certainly looking forward to the third one.