Me on Warrior Witch 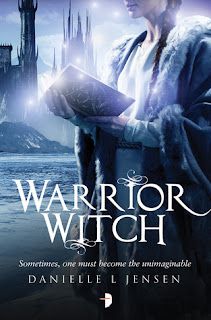 Cécile and Tristan have accomplished the impossible, but their greatest challenge remains: defeating the evil they have unleashed upon the world. As they scramble for a way to protect the people of the Isle and liberate the trolls from their tyrant king, Cécile and Tristan must battle those who'd see them dead. To win, they will risk everything. And everyone. But it might not be enough. Both Cécile and Tristan have debts, and they will be forced to pay them at a cost far greater than they had ever imagined.

Warrior Witch is a deadly ending to a looming war, a search for answers and solutions.

This is it. It's time for Cécile and Tristan to make some decisions. Hard decisions. Practical decisions. They're looking at the bigger picture here, the ways in which to stop the trolls who would wage war against the humans. The ways to stop those who would want them dead. Their actions are seen as cold, heartless, unfeeling, but they don't have the luxury to think about themselves, to consider being compassionate. They're trying to save lives, save each other, save as many as they can. But that doesn't mean they can save everyone. It's now a race against time, time they might not have.

This book is the end to a series full of impossible magic, lies and betrayal, death, and hope for the future. It's all about choices and inescapable promises, debts owed and debts called in. Those make this a hard book, a lesson in futility. In doing what needs to be done over what you want to do, what you'd rather do in order to make everything hurt less. And things really hurt at the end of this book.

(I received an e-galley of this title to review from Angry Robot through NetGalley.)
Posted by Lindsay at 6:00 AM