Me on Map of Fates 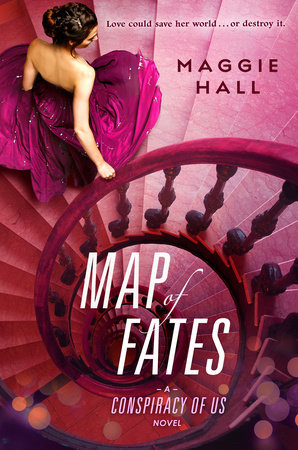 Two weeks. That's how long it took for Avery West's ordinary life to change forever: In two weeks, she discovered she was heiress to a powerful secret society known as the Circle, learned her mother was taken hostage by the Circle's enemies, and fell for a boy she's not allowed to love, just as she found out another was her unwelcome destiny. Now, Avery crosses oceans in private jets to hunt for clues that will uncover the truth about the Circle, setting her mom and herself free before it's too late. By her side are both the boys: Jack—steady, loyal, and determined to help her even at the expense of his own duty—and Stellan, whose connection to Avery grows stronger by the day despite her best intentions, making her question what she believes at every turn. But at the end of a desperate hunt from the islands of Greece to the red carpet at Cannes comes a discovery that not only changes everything, but could bring the whole world to its knees. And now Avery is forced to face the truth: in the world of the Circle, no one is what they seem.

Avery is focused, determined. She has one main goal: save her mom. To do that, she has to find something lost for hundreds of years. The tomb of Alexander the Great. She's trying hard to solve riddles, to uncover clues. Trying to avoid the unspoken words that pass between her and Jack, between her and Stellan. Trying to find friends and allies in a world of secrets and spies, enemies who would use her for their own gains. The stress and strain grows and grows, weighing her down. But she can't do it alone. She needs those close to her, those ready and willing to help her, in order to complete her search.

This continues the race around the world that started in the first book. As with the first, I'm intrigued by the mystery aspect, by the clues hidden in history aspect. By the myths and legends passed down through the ages, by a sort of prophecy that seems inescapable in the modern day. But will it all come to pass that way? Must Avery join together with someone not of her choosing? Has her future already been determined? She's not stupid, but with her mother taken from her she's emotional. Worried, nearing desperation. She would do anything, perhaps even work with anyone. But would it be worth it? Could she truly trust them?

In a series like this, a series of secrets and myth, of mystery and puzzles, of families drunk on power and status, it's hard to trust anyone who isn't Avery. The reader sees everyone through her eyes, notices the way they speak and the way they act. The words they say, the names they mention. But only when Avery is looking that hard. In a world this dangerous, how can Avery trust anyone? Because she has no choice. Because she can only do so much as a teen girl in Europe. Searching. Hoping that no one she cares about will die. A book for those looking to continue a tense series of international intrigue and complicated emotions.

(I borrowed a copy of this title from the library.)
Posted by Lindsay at 6:00 AM