It's the weekend! Which is nice, but I've had a disgusting sick week this week. I became victim #2 of the current sickness in the house. I've been all stuffed up and full of sinus pain and headaches and coughing. The last day or so hasn't been fun. *falls over, congested and dead*

Reviews going up this coming week will feature If I Was Your Girl by Meredith Russo (Tuesday) and The Raven King by Maggie Stiefvater (Friday; this will be a bit of a non-traditional review, my thoughts on the book and the series as a whole without giving the plot away). 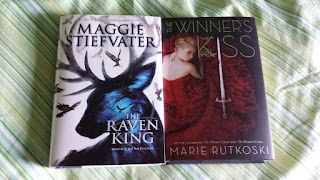 The Raven King by Maggie Stiefvater (bought) Some Canadian bookstores put out their copies early, like 2 weeks early, and sent out the pre-orders. This arrived on Monday, 8 days before the April 26 release date.
The Winner's Kiss by Marie Rutkoski (bought)
Posted by Lindsay at 8:00 AM