Me on Love, Lies and Spies 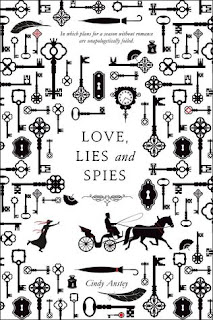 Juliana Telford is not your average nineteenth-century young lady. She's much more interested in researching ladybugs than marriage, fashionable dresses, or dances. So when her father sends her to London for a season, she's determined not to form any attachments. Instead, she plans to secretly publish their research. Spencer Northam is not the average young gentleman of leisure he appears. He is actually a spy for the War Office, and is more focused on acing his first mission than meeting eligible ladies. Fortunately, Juliana feels the same, and they agree to pretend to fall for each other. Spencer can finally focus, until he is tasked with observing Juliana's traveling companions... and Juliana herself.

Love, Lies and Spies is light, sweet, and tinged with mystery, the everyday happenings of a young woman who would rather spend time with ladybugs and a young man helping his friend with his romantic pursuits. But something else is going on.

Juliana is intelligent and leans towards the more scientific and natural sides of things, unlike most young ladies of stature and position of the time. She has no need nor care for a husband. One would only limit her explorations, her research with her father on the ladybugs of their quiet village. She's quiet and thoughtful, a definite wallflower who doesn't see why things should change, why she absolutely needs to go to London for the Season.

Spencer is clever, driven, determined to crack the case he's currently working on. He has to find out who the culprits are, who's been sharing secrets with those outside of England, and stop them before too much is revealed. He's focused, which is good considering he's working for the War Office, but sometimes he gets too focused, sometimes his vision tunnels on certain things. Like the sudden appearance of Juliana. It helps him, but it also leaves him blind to other possibilities, other people around him.

I liked their relationship at the start. Both were using the other as a means of deflection and distraction in order to impact the situation around them, be it simply romance or entertainment or something more dangerous like spying for the War Office. They felt like honest friends at the start, even with Spencer hiding his true motives from Juliana. Most of his true motives. I will admit that perhaps it was a little obvious, the both of them somewhat drawn to each other at the beginning, but there was never any rushing into anything.

I found this to be a fun and light-hearted romp. Yes, there's some intrigue and some espionage going on, and yes, things get a little dangerous and intense at times, but I would still call this book fun. It's the exchanges between Juliana and Spencer that make it entertaining. I would suggest this book to readers looking for a fun historical mystery with clever characters.