Me on The Pharos Gate 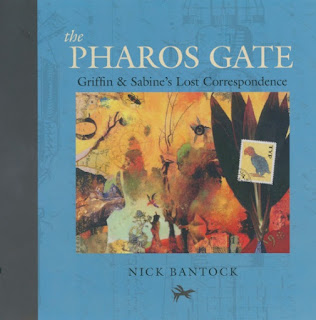 A love story for the ages, the tale of Griffin and Sabine is an international sensation that spent over 100 weeks on the New York Times bestseller list and continues to beguile readers 25 years after its original publication. Here to celebrate that anniversary is the final volume in Griffin and Sabine's story—a book that can be enjoyed as a singular reading experience or in conjunction with the series as a whole. The Pharos Gate rejoices in the book as physical object, weaving together word and image in beautifully illustrated postcards and removable letters that reveal a sensual and metaphysical romance, one full of mystery and intrigue. Published simultaneously with the 25th-anniversary edition of Griffin & Sabine, The Pharos Gate finally shares what happened to the lovers in a gorgeous volume that will surely delight Griffin and Sabine's longtime fans and a new generation of readers.

The Pharos Gate is magical, a return to the impossible and inescapable magic of the previous books. A return to a couple separated by land and sea but connected by the depth of their love for each other, connected by happenstance. By letters and postcards.

The first three books enchanted me as a child. The gorgeous and sometimes abstract artwork of the postcards. The curved lines of Sabine's handwriting. The nervousness and hesitation in Griffin's first few messages, the panic at the end of the first book. The intensity of their journey. The way this story is told in few words, the finite number of words that can fit on the back of a postcard, but conveys enough emotion and determination as any thousand page book can.

Here is the last stretch for Sabine and Griffin. After corresponding for more than a year, after travelling around the world, after a failed attempt at being together, they are ready to leave their homes and their lives behind. They've shared secrets, shared artwork and ideas, shared the depth of their love for each other and the joy and sorrow that sprang up from it, like seedlings in the spring. They're ready to be together. But it's not so simple. Their first encounter was by chance, Sabine somehow, in the South Pacific, being able to see into Griffin's London studio. It was impossible. Improbable. And here are those in the world that will not allow them to meet.

There's an extra something in this book, an extra poignancy that's currently lost in the digital age, in the age of technology and immediacy. Time passes so slowly here. The longing, the waiting. The yearning to find a card in the mailbox, to see the familiar handwriting. This is what I remember when reading those first three books so many years ago. The desperation in Griffin and Sabine's words. Their desire to finally be face to face, to finally be together without fear or anger or distance in their way. Without the rules of the world in their way. They defy their hunter, defy the idea that "the pragmatic and the ethereal" should never meet, never marry. This is their choice. No matter what the rules of the world are, what some say. Their connection is stronger than that, goes deeper than that, and they will not be kept apart any longer.

I wonder if these books are where it started, my love of the mundane combined with the extraordinary. With storytelling. With epic love stories and connections. This is a definite must-read for those who fell in love with the earlier books, for those who've always wondered what happened between The Golden Mean and The Gryphon. For those looking for a piece of the impossible.

(I received a finished copy of this book to review from Raincoast Books.)
Posted by Lindsay at 6:00 AM