Me on Gotham Academy Volume 2 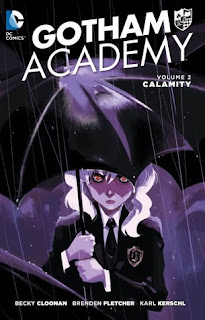 At the beginning of the term, Olive Silverlock returned to Gotham Academy a shadow of her former self. But thanks to her new friendships and their Detective Club sleuthing, Olive was finally starting to feel whole again. But now, Olive is seeing ghosts. A spectral, robed figure is haunting the Academy, and haunting Olive in particular, appearing to her and giving sinister instructions. Could this spirit be the key to unlocking the secrets of her family's dark past? Or is Olive simply losing her grip on reality? Plus, the kids hunt a werewolf on campus and Maps teams up with the Academy's newest transfer, Damian Wayne!

Gotham Academy Volume 2 is again full of mystery, investigation, danger, and supportive friendships. Olive's sorrow hangs over the school like a cloud full of rain, but she and Maps are still searching. Still hoping to find out more about Olive's mother and the secrets hiding in the walls.

Olive and Maps are back. Back to being awesome friends that work with each other, back to searching out the secrets of Gotham Academy. The secrets in Olive's past. Things are a little more serious now. We start to see the reason why Olive's mother was locked away in Arkham, the reason why Olive was sent to Gotham Academy. Her loneliness, listlessness, and desperation are quite clear. As sad as she is, she's desperate to know why, know who, and know what comes next. Maps, as always, is supportive, but she can't escape sticking her nose into secret things. Into Batman-related things. Into kick-ass sidekick things.

As with Volume 1, I love the artwork and the colouring. The clean, thin lines. The fury in Olive's eyes in the cover art. The bright pop of Maps' yellow raincoat in a dark, dreary, rainy scene. The sweet, round faces found in the first 'chapter' of this volume, the adorable artwork done by Mingjue Helen Chen.

After Volume 1, I had high hopes for this series. I was hoping what I found would continue. That the Pizza Club would keep on searching out and hunting down the Academy's secrets and mysteries. That the reason behind Olive's distant summer would come to light. In some ways, that is what's happened. It goes deeper into what pushes Olive, what motivates her and what scares her. But that's as deep as it goes. I was hoping for more about the school and its students. More diverse representation. Some LGBTQ characters.

I do wonder if I'm at some kind of crossroads with this series, if I'm waiting for a story that's being held back because of the pacing and release schedule of comics. Volume 2 is good. It picks up where Volume 1 left off and gets into some dark, dangerous things. I suppose I thought there would be more. Still, I am curious as to where the series will go as a whole. What Olive will do with this new family knowledge. Where Maps will go in her quest to learn every secret thing about Gotham Academy.

(I received an e-galley of this title to review from DC Comics through NetGalley.)
Posted by Lindsay at 6:00 AM