Me on Under the Dusty Moon 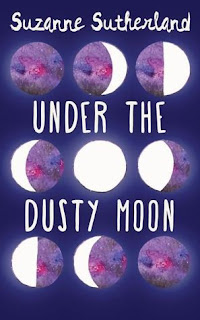 Victoria Mahler is the sixteen-year-old only daughter of rocker Micky Wayne, whose band, Dusty Moon, took the world by storm when Micky was just a teenager. The band broke up under mysterious circumstances, but, after years spent off the road being a mom, Micky's solo career is finally starting to take off. When an offer to tour Japan falls into her mom's lap, Vic is left to spend the summer under the care of her distant grandmother, and without her built-in best friend. Fortunately, a boy with a secret geek side and a group of feminist game-makers save the season, and Vic starts to see herself as her own person, out from under her mother's shadow. But when Micky finally comes home — with a poorly chosen boyfriend in tow — all bets are off. Will Vic be able to maintain her newfound sense of self amidst the building thunder of Micky's second chance at stardom? And through it all, will Micky still really be her best friend?

Under the Dusty Moon is clever and bright, wonderfully capturing the screwups, mistakes, and flaws of being a teen, of fighting with friends, of dating, of trying to figure out who you are and what you want to be when you're in someone's shadow.

Victoria is smart, creative, and somewhat serious. She'd have to be, what with her mother being a bit bold and fun, maybe a little wild. Books like this highlight the focus of teens, which is often themselves. Vic resents her mom and her career as a musician. Why can't she get a real job? Why does she have to leave her alone for part of the summer? Why dis she get famous when she was younger, making Vic feel incompetent, like she'll always come in second place? Vic looks at her mom, sees someone who people know, sees someone who made a name for herself, and doesn't think she could have something of her own without people wanting to talk about her mother and her old band. She doesn't know that she's smart and creative enough on her own, she can only see her own flaws and insecurities. Now, with her mother out of town, Vic has a chance to find something that's hers, but will it work out?

This book feels so classically Canadian. The Toronto streets. The hot, sticky summers. The money struggles of anyone trying to be a musician or in the arts in a big city. The story of one person trying to figure themselves out. The self-discovery journey is part of so many books, but there's just something about it here that screams Canadian.

I think the author has fairly captured what it is to be a teen here. To be clueless and bratty and demanding of parents. To want to have their own things, to have some private things without your parents embarrassing you. To be kept in the loop with friends, to be able to stay friends while being with others. To not screw up dating a guy you really like because there's only ever one chance for a first date, first kiss, first time having sex. In some ways this is a serious comedy of errors (the awkwardness of parents who blab everything!). Everything seems to go right then go wrong for Vic and she scrambles to pick up the pieces. I would recommend this to those looking for something fun but also thoughtful and realistic.

(I received an advance copy of this title to review from Dundurn Press.)
Posted by Lindsay at 6:00 AM