Me on These Vicious Masks 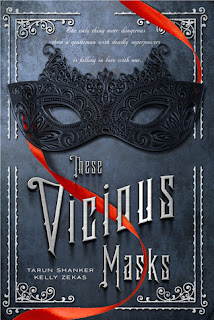 England, 1882. Evelyn is bored with society and its expectations. So when her beloved sister, Rose, mysteriously vanishes, she ignores her parents and travels to London to find her, accompanied by the dashing Mr. Kent. But they're not the only ones looking for Rose. The reclusive, young gentleman Sebastian Braddock is also searching for her, claiming that both sisters have special healing powers. Evelyn is convinced that Sebastian must be mad, until she discovers that his strange tales of extraordinary people are true—and that her sister is in graver danger than she feared.

These Vicious Masks is a combination of the mysterious, the paranormal, and the adventurous, carried along by a quick-witted heroine with a clever tongue.

Evelyn is intelligent, opinionated, and head-strong. When her sister disappears and heads off to London, she refuses to sweep it under the rug. Refuses to not know the truth, to not be able to help and possibly rescue Rose. Which means a quick trip to London. Which means having to uncover secrets with the assistance of two rather different young men who annoy her for different reasons. But if she didn't work with them, find them irritating, begrudgingly accept their help when she needed it, she wouldn't have discovered the truth about them. About Rose. About herself.

The premise intrigued me, a mixture of Victorian sentiments and social movements mixed with a bit of the unexpected. It sounded like something I would read. The spirited heroine and the men who confound her, the search through the good streets and the bad, the shine of polite society and the harsh reality of the side streets and the docks. I had fun reading about Evelyn's moving between the two parts, struggling to keep them separate.

There were a number of times when I chuckled at the witty banter between Evelyn and Mr. Kent and Evelyn and Mr. Braddock. Both push her, annoy her, infuriate her, and she's able to do battle with them quite expertly. Considering I've recently read The Dark Days Club, I could say that there's a similarity or two, for those looking for something comparable to read, but this had much more humour and clever banter. I felt both amused and excited as I read on, curious as to what Evelyn would discover next on her search for Rose. I would recommend this to those looking for a race through Victorian London with some intelligent characters with some intriguing abilities. I'll be happily waiting for the next book.