Me on Kill the Boy Band 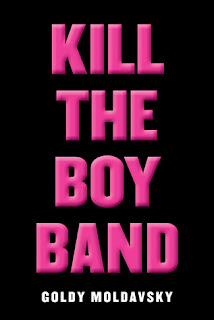 Okay, so just know from the start that it wasn't supposed to go like this. All we wanted was to get near The Ruperts, our favorite boy band. We didn't mean to kidnap one of the guys. It kind of, sort of happened that way. But now he's tied up in our hotel room. And the worst part of all, it's Rupert P. All four members of The Ruperts might have the same first name, but they couldn't be more different. And Rupert P. is the biggest flop out of the whole group. We didn't mean to hold hostage a member of The Ruperts, I swear. At least, I didn't. We are fans. Okay, superfans who spend all of our free time tweeting about the boys and updating our fan tumblrs. But so what, that's what you do when you love a group so much it hurts. How did it get this far? Who knows. I mean midterms are coming up. I really do not have time to go to hell.

Kill the Boy Band is outrageous, full of four teen girls, their current obsession, and the lengths they'll go to to meet them. Only things go a bit weird and nothing goes according to plan.

This book is all kind of insane. I knew going it that it was going to satirize fandom, that it was going to highlight the dark dark DARK side of fandom. The obsessive side, the oblivious side, the nasty side. Everyone seemed like they'd lost their minds. That for the four teen girls, consequences didn't matter. Than they could kidnap a member of a boy band. That they could tie him up. That they could ransack his hotel room.

There's always going to be a dark side to being a fan, unfortunately. To be part of a fandom. There will always be people who spend all their time on their fandom. Who go to every concert or event. Who try to get backstage. Who follow them. Who send them creepy-sounding messages. It's not healthy. This book shows how unhealthy it is, what it does to people. It makes them vicious, like Isabel, or in denial, like Apple, or regretful, like Erin. Or thoughtful, like the narrator. The narrator, by whatever name she goes by, seems to be the most sensible. She's shocked at every turn when her friends do something crazy. Like kidnap Rupert P. Like go through his pockets. Like go up to the band's hotel room. But she still goes along with it. She wants to know. She wants to see.

I can see where many will find this book funny. It's outrageous, both in plot and in the different characters. In the beginning, I thought it was fun. But I kept waiting for common sense to kick in with someone, anyone, and it didn't. I think that's where I went wrong with this book, that I had to suspend my common sense, and I couldn't fully do that. This book just wasn't it for me. BUT. But. If you were already interested in reading this, if the summary grabs you, if you're looking for a dark comedy about being a crazed fan, then by all means give this a read.