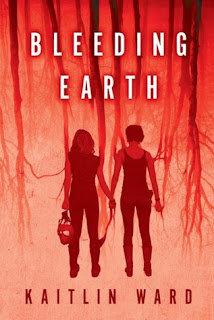 Lea wants to ignore the blood. She wants to spend time with her new girlfriend, Aracely, in public, if only Aracely wasn't so afraid of her father. Lea wants to be a regular teen again, but the blood has made her a prisoner in her own home. Fear for her social life turns into fear for her sanity, and Lea must save herself and Aracely whatever way she can.

I've been waiting to read this for a while. Sometimes I wonder if I should've read the e-galley from Egmont before they went bankrupt, just to read the story, but I wanted to see if it would get picked up or self-published. I'm hoping it'll be good. It's not every day you come across an apocalyptic YA where the main character is a lesbian.
Posted by Lindsay at 12:02 AM