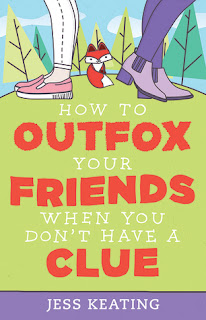 Title: How to Outfox Your Friends When You Don't Have a Clue
Author: Jess Keating
Release Date: October 2, 2015
Publisher: Sourcebooks Jabberwocky

Surprise! Ana's long distance BFF is finally coming back to visit. But with her purple hair and new attitude, Liv is barely the girl Ana remembers. This new Liv probably thinks a birthday party at the zoo is lame. Maybe if Ana has a super-secret sleepover instead, she'd never have to introduce Liv to Ashley, former enemy and now Ana's best-ish friend. What could go wrong?

How to Outfox Your Friends When You Don't Have a Clue is fun, adventurous, and heartfelt. Ana's a sweet girl, trying to figure everything out, trying to keep things the same. But sometimes friends change. What's a girl to do when that happens?

Ana is back. As inquisitive as ever, as helpful as ever. As fumbling through life like every other kid that's ever turned thirteen or had old friends come back to visit. She has no idea what to expect when it comes to life, school or friendships or anything else. All she has are hopes and expectations, what she thinks might happen from TV and movies and gossip. But those pale in comparison to how it actually unfolds.

Friends can be tricky. It can be hard to find them, harder to keep them. When you can, when they last, it's special. You feel like you've found that person that will understand you for the rest of your life. But sometimes they move away. Sometimes you're scrambling to find that feeling again. You'll never have the same kind of relationship with a different person, but that's fine. Friendships are never the same, they differ from person to person. You don't have to have everything in common in order to be friends. Ana was lost when Liv moved away, she felt cast adrift in the bizarre world of middle school. Now, now that's made peace with Ashley and gotten to know Bella. She's feeling better. But that doesn't discount what she had, has, with Liv. People can change. It's the lying that can ruin things.

I think this series is honest it how complicated it feels to be a kid, a new teen. You're supposed to start figuring some things out but you're not sure how. You don't want to change but every day is a step closer to the next big achievement. Thirteen. High school. Sixteen. Driving. Ana's is a great point of view. She's bright and curious, she loves animals, she has a good support structure, and she's awkward. A definite recommendation for those looking for fun, smart, realistic middle grade.