Hi! It was really cold this week. And I was mowing the lawn last weekend. *face-palm* Why you ask? Because it was sort of nice and the lawn was looking gross. I didn't enjoy it. Also it looks like I'll be doing it again soon because it still looks a bit gross out there.

Everyone's at the Toronto Book Fair and I'm super jealous. Now, from what I've seen from some people's pictures, it looks a bit fancy. Like a fancy showroom of sorts. (Those who've been, feel free to correct or confirm. Also, know that I'll be stalking your blogs for recaps as I'm tempted to go if there's one next year.)

I'm at a standstill with NaNo, to be honest. The idea I had initially has shifted in something totally different and I don't think I like it anymore, and I don't want to stick with something I don't like, or go back and fix it. I think I might semi-cheat and start a different idea, but I'm not sure. I need to catch up on my reading, I've read one book in the last week and a half.

Christmas things are slowly exploding everywhere! Too early? When I saw red Starbucks cups were in on the 1st, I thought it was too early. Remember when the red cups would show up in the last few days of November?

Reviews going up next week will feature Drama by Raina Telgemeier (Tuesday) and Stitching Snow by R.C. Lewis (Friday). :) 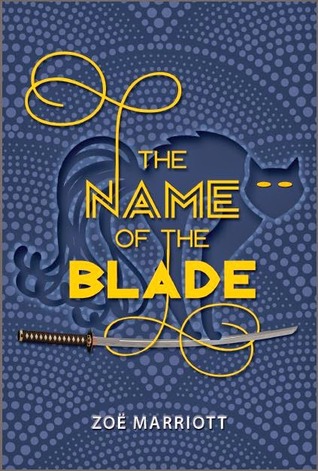 Bought/borrowed/received:
The Name of the Blade by Zoë Marriott (e-book borrowed from library) (I like the UK covers way better, and the UK title, The Night Itself. I mean, the nine-tailed cat monster is really cool, and the katana, but the UK covers have an actual Asian girl swinging a katana around. With the awesome Diverse Books movement that's going on right now, I want that on a cover.)
Posted by Lindsay at 8:00 AM