Me on Relax, I'm a Ninja 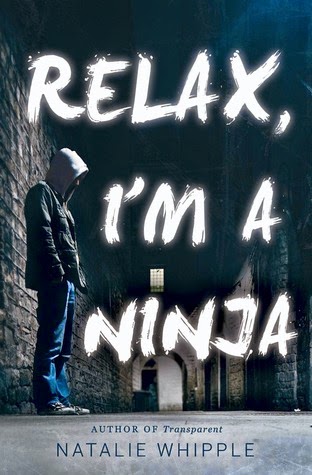 A Clan of ninjas in San Francisco may sound improbable, but as the son of a ninja master, Tosh Ito knows what lurks in the shadows of his city. Or at least he thought he did. When a killer with a poisoned blade starts cutting down teens, Tosh enlists Amy Sato—newest ninja recruit and his best friend's crush—and sets out to uncover the killer's identity. What they find is ninjutsu more evil than they could have ever imagined. As Amy and Tosh grow closer, they discover their connection unleashes a legendary power that could stop the murders. Problem is, that power may be exactly what the killer is looking for, and wielding it could cost them both their souls.

Relax, I'm a Ninja is exciting, mysterious, and dangerous. It's a tense exploration of truth and lies, trust and secrets, good and evil, and the power to fight back.

What stands out for me with Tosh is his voice. It's filled with knowledge in terms of what it is to be a ninja, to train as a ninja, to keep quiet, to hide in a crowd. To appear as if you don't have any secrets to hide. It's also filled with the self-assuredness, awkwardness, and attitude that is being a teenager. Hanging out with friends, raiding in D&D, playing games online. Butting heads with the school jock or uptight cheerleader. Trying to figure out if a girl likes you or not, or if you like her.

I enjoyed this different look into ninjas, into the culture and the secrecy, the physicality and the training. It's not always all black clothes, throwing stars, and deadly poisons. Sure, those are present, but it's more than that. It's the day-in day-out of training that comes across in Tosh's tone of voice, in his habits and ways of thinking and observing. It's the acknowledgement that, yes, they're ninjas, but that doesn't mean they're on the side of good, that the lines are rather blurred. Except, in this case, when it comes to killing innocent people.

A life spent hiding, surrounded by secrets and deception, always watching. I imagine that kind of life would get rather lonely. Tosh isn't alone, though. He has his parents, his friends, the Clan, but it's still the life of a ninja. Hiding in plain sight, watching your every move so you don't give away the truth about yourself.

I will admit that I cringed during a scene that centered on how catty teenage girls can get, but other than that I found this book different and exciting. It's fast-paced with an interesting and new voice carrying the story. I certainly would recommend this to anyone looking for a book that's a little different, a lot quirky, full of adventure, and the odd ninja or two. Or ten.