Me on Strange Grace 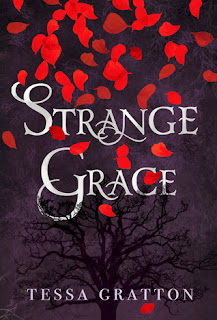 Long ago, a village made a bargain with the devil: to ensure their prosperity, when the Slaughter Moon rises, the village must sacrifice a young man into the depths of the Devil's Forest. Only this year, the Slaughter Moon has risen early. Bound by duty, secrets, and the love they share for one another, Mairwen, a spirited witch; Rhun, the expected saint; and Arthur, a restless outcast, will each have a role to play as the devil demands a body to fill the bargain. But the devil these friends find is not the one they expect, and the lies they uncover will turn their town—and their hearts—inside out.

Strange Grace is haunting, moving and magical. It's a story of bargains and sacrifice, of love and fate, of a tree and a forest and the heart that lives there. It's a story of place and self and destiny and an overwhelming, earthly magic.

Mairwen is a witch, a Grace witch like her mother and the women in their family before them, descended from the Grace sisters the town was named after. As a Grace witch, she can never go into the forest, but she can hear it calling her name. Waiting for her. But she has a part to play as a Grace witch when the Slaughter Moon comes every seven years. But now, when it comes early, she's worried because of who will most likely be the next saint. Rhun is the apparent best of all the young boys and men looking to do their part to keep the town protected for another seven years. He has the strength and the skill to, hopefully, survive a night in the Devil's Forest. But he is afraid of dying like so many before him and leaving behind those he cares about. Like Mairwen. Like Arthur. Arthur is sharp and brash, fueled by anger and disgust and a hatred for the early days of his childhood. He's an outcast in a town he's lived in his entire life because he doesn't understand who he is. When the Slaughter Moon comes early, all three of them know what will happen, and all three of their hearts race toward something they never expected they'd uncover.

This completely satisfied me when I knew I'd be reading another Tessa Gratton book. There were moments that took me back to some of her previous books, ones like Blood Magic and The Blood Keeper. Magic all around people, in the earth and trees and everything else. Secrets that stretch back through time. Love leading characters through danger and despair, through near-death experiences. Characters joined together in more ways than one, in love and blood and the beating of their hearts. It's atmospheric and haunting. This is a dark and twisted tale of magic and love that I'm sure to read again before the year is out. I'd definitely recommend this to those looking for dark tales of destiny and witches, something similar to Peternelle van Arsdale's The Beast Is an Animal.

(I received an e-galley of this title to review from Simon & Schuster Canada through NetGalley.)
Posted by Lindsay at 4:00 AM