Me on Tess of the Road 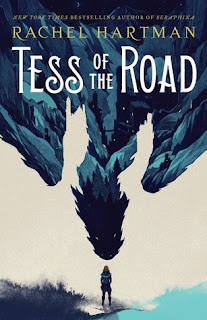 In the medieval kingdom of Goredd, women are expected to be ladies, men are their protectors, and dragons get to be whomever they want. Tess, stubbornly, is a troublemaker. You can't make a scene at your sister's wedding and break a relative's nose with one punch (no matter how pompous he is) and not suffer the consequences. As her family plans to send her to a nunnery, Tess yanks on her boots and sets out on a journey across the Southlands, alone and pretending to be a boy. Where Tess is headed is a mystery, even to her. So when she runs into an old friend, it's a stroke of luck. This friend is a quigutl--a subspecies of dragon--who gives her both a purpose and protection on the road. But Tess is guarding a troubling secret. Her tumultuous past is a heavy burden to carry, and the memories she's tried to forget threaten to expose her to the world in more ways than one.

Tess of the Road is indescribable, unfortunately, but I will make an attempt. This is the story of a young woman hiding from her memories and ready to run from her future in order to be herself, a young woman who discovers herself along the road of epic journey, bizarre kidnapping, family troubles, construction, and exploration. A story of drunks and dreams and the moments in which one discovers their vocation.

Tess is a young woman made up of secrets, memories, and many things she'd like to forget. Like the dark parts of her past. Like her ways of getting into trouble, of not keeping quiet. Like how she got drunk at her sister's wedding and later punched her sort of brother-in-law in the nose. She's curious and gruff, intelligent and unforgiving. Stubborn. Unwilling to bow down. She's the kind of young woman who will venture out on her own, old friend Pathka the quigutl at her side on their own journey, to see what the world will show her. But what will the world show her? Where will it take her? What will it make her remember?

With this being my first Rachel Hartman book, I don't know that this is what I expected. Knowing her previous two books were connected to this one, I expected a few things. A medieval fantasy land. Possible dragons. Some post-war peace times. Maybe some magic. Maybe some dragons. I didn't expect a wholly uncooperative heroine and her internal struggle to dismantle all the religion and shame that was pushed at her when she was a child. I didn't expect a classic fantasy 'journey down the road disguised as a boy' that would dissect and deconstruct rape culture. I will never be able to describe this book accurately, because the second I finished I simultaneously wondered what in the world I'd just read and why more books weren't like this. Why more fantasy books about young girls and women weren't about them owning their mistakes, their dreams, and their bodies. From what I've read, this book is rather different from its predecessors. It's rather character-driven, Tess walking her way down the road, meeting people and discovering herself. It's certainly something I would suggest to those looking for something familiar yet utterly different from any other fantasy novel.

(I received an e-galley of this title to review from Random House Books for Young Readers through NetGalley.)
Posted by Lindsay at 4:00 AM