Me on The True Queen 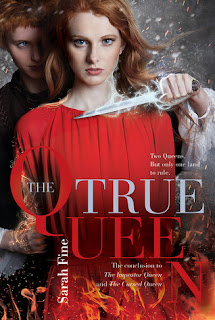 Now that Ansa knows she is the destined queen of Kupari, she is desperate to find a permanent home for her people, the Kriegere, in the Kupari lands. But as the small band of warriors crosses into the foreign territory, Ansa loses her fragile grip on her newly-acquired—and violent—fire and ice magic and puts everyone, including her love Thyra, in danger. Inside the walls of Kupari, Elli maintains the facade that she is the magical queen, with her secret—that she has no magic at all—on the brink of exposure every day. But as she tries to prepare the citizens to protect themselves from another invasion, unrest spreads as wielders like her beloved Oskar begin to lose control of their powers. As Kupari grows increasingly unstable, with the land literally crumbling beneath their feet, and a common enemy once again threatening everything, these two young women on a collision course with destiny must find a way to save the realm and their people from total destruction.

The True Queen is a conclusion, an ending for multiple journeys. It's a coming together of magic, of different people, and of danger. It's Elli and Ansa finally coming together, magic and balance reunited, but with the land tearing itself apart, they may not have long.

Ansa is on her way back to Kupari. The land of her birth, the land she was taken from. The land that's desperate for her to return as the Valtia, but she worries. Worries about her magic, about how to control it in order to keep her people and Thyra safe. Thyra has faith in her, but Ansa isn't so sure. Elli is struggling to keep things calm in Kupari, in a city that believes her to be their magical saviour when she isn't. When the ground starts moving, when fire and ice wielders begin to lose control, she's at a loss. She can only hope that the Valtia will come to them, will help restore the magic. But danger is always waiting for its time to strike.

What happens in this book are multiple struggles, for survival, for power, and for control. Both Ansa and Elli will do whatever it takes to keep the land whole, to keep everyone alive, to keep everyone they care about alive. But the land is making its demands. This was certainly a conclusion that didn't pull its punches, that made impossible demands of the characters. I don't know if it made me happy, but I do think it made sense in terms of the overall story. Hard choices have to be made.