Me on Shadow Weaver 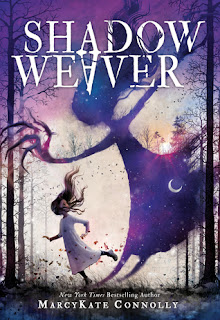 Emmeline has grown up with a gift. Since the time she was a baby she has been able to control shadows. And her only friend and companion is her own shadow, Dar. Disaster strikes when a noble family visits their home and offers to take Emmeline away and cure her of magic. Desperate not to lose her shadows, she turns to Dar who proposes a deal: Dar will change the noble's mind, if Emmeline will help her become flesh as she once was. Emmeline agrees but the next morning the man in charge is in a coma and all that the witness saw was a long shadow with no one nearby to cast it. Scared to face punishment, Emmeline and Dar run away. With the noble's guards on her trail, Emmeline's only hope of clearing her name is to escape capture and perform the ritual that will set Dar free. But Emmeline's not sure she can trust Dar anymore, and it's hard to keep secrets from someone who can never leave your side.

Shadow Weaver is a twisty tale of friendship, of truths and lies, of magic and secrets.

Emmeline is a lonely girl. Because of her shadow magic, her ability to control and shape the shadows around her, there are a lot of people who avoid her. Fear her. As she wants to be liked by them, she's told she doesn't need them by her own shadow named Dar. Dar has always been with Emmeline, she'll protect Emmeline and keep them together. They need each other. But then someone comes to Emmeline's house talking about a cure, about separating her from her magic, and Dar pushes her to leave. Then comes a journey away from home and towards possibly learning the truth about Dar, about why she's not exactly like the other shadows. About why she speaks of freeing herself from Emmeline.

It's slightly similar to the author's previous middle grade books, mysterious and magical but set in a wholly new fantasy land. This felt slightly eerier, though. A little more darker and dangerous, a little more duplicitous. There was a time or two when I found Emmeline rather naive when it came to Dar's insistence and bizarre requests, but that was on me. Looking at Emmeline, at a lonely girl who's only ever had one consistent person in her life that cared about her and played with her, when that person was Dar, why wouldn't Emmeline trust her more than other people? I would recommend this to middle grade readers who are looking for more fantasy stories.