Me on Horimiya Volume 4 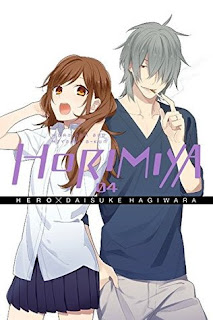 When Miyamura murmurs an "I like you" to Hori, who's laid up in bed with a fever, is he talking to himself? Or is he actually confessing to having feelings for her?! Hori is conflicted, but their secret-filled relationship is unmistakably changing little by little...

Horimiya Volume 4 is, again, the continuing tale of Hori and Miyamura, their friendship and their relationship, their friends and their high school days. But now it's gotten a little more serious.

Miyamura's finally said something, said he likes Hori (in a romantic way). But now there's some distance between the two of them. Now they're both avoiding each other, avoiding having to talk about how their relationship has changed. But it couldn't stay how it used to, right? Someone had to say something. And Miyamura finally said something. And he's going to continue to say something to Hori about it. If only Hori's incredibly nosy dad didn't just show up out of nowhere. On the other side of things at school, Ishikawa's still dealing with knowing that Hori and Miyamura are getting closer while sort of having a crush on Hori.

The whole series nails the odd feelings and contradictions that comes with high school, that comes with being a teen having feelings for someone who's around you almost every day. You're not sure what to say, you're not sure how the other person feels. When you do say something it's either the wrong thing or something completely out of left field in order to hide what you were thinking about. Anyone interested in YA, in complicated personal relationships, in stories full of honest awkwardness and humour should check out this manga.