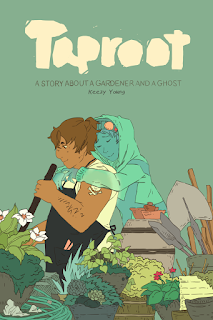 Blue is having a hard time moving on. He's in love with his best friend. He's also dead. Luckily, Hamal can see ghosts, leaving Blue free to haunt him to his heart's content. But something eerie is happening in town, leaving the local afterlife unsettled, and when Blue realizes Hamal's strange ability may be putting him in danger, Blue has to find a way to protect him, even if it means... leaving him.

Taproot is a sweet and sad story about two people, one a ghost caught in-between life and death and one a friendly gardener. Both have secrets, but only one could spell disaster.

Blue is a ghost, which makes things a little hard, but it's all good for the most part. He can still wander around through town, and there are other ghosts he can talk to and hang out with. There's lots of opportunities for people watching. And there's Hamal, who strangely enough can see ghosts. So it's not too lonely. But it's not the same. Because he can't touch anything. And there are rumours going around about a creepy dead forest pulling some of the local ghosts to it. Hamal works in a flower shop. He's a helpful and friendly guy, maybe a little shy at times, and he loves his job. And he can see ghosts, which is something he's been able to do since he was a kid so they don't scare him. They can actually be rather friendly. Like Blue. He likes spending time with Blue, but sometimes things can get awkward. As close as they are, Blue's still dead. Maybe it's time for Hamal to make more friends. Alive friends.

I rather enjoy Young's art style here. The different buildings that make up the city. The different characters, the wide range of skin colours and body types. The colours fit well with the story, lots of greens and blues, and then the lack of colour in the strange forest, just black and grey and white. I also liked their facial expressions, Hamal's curious face and Blue's big smile.

I remember reading this as a webcomic, so I'm happy to see it published and expanded at the end (from what I remember). It's a sweet story about friendship and death, about secrets and how we want to both keep them to ourselves and say them out loud before we burst. Because sometimes we wait too long before saying something important to someone we care about. I would recommend this to readers looking for more standalone graphic novels with older protagonists, those in their teens or 20's and later.

(I downloaded an e-galley of this title from Lion Forge through NetGalley.)
Posted by Lindsay at 4:00 AM