Me on The Mesmerist 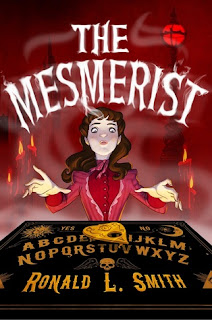 Thirteen-year-old Jessamine Grace and her mother make a living as sham spiritualists—until they discover that Jess is a mesmerist and that she really can talk to the dead. Soon she is plunged into the dark world of Victorian London's supernatural underbelly and learns that the city is under attack by ghouls, monsters, and spirit summoners. Can Jess fight these powerful forces? And will the group of strange children with mysterious powers she befriends be able to help? As shy, proper Jess transforms into a brave warrior, she uncovers terrifying truths about the hidden battle between good and evil, about her family, and about herself.

The Mesmerist is haunting, the story of a young girl's journey into the darkness of London and the monsters that hide there.

Jess has an important mission given to her almost immediately. Taken to London by her mother, she's told that she's a mesmerist, someone who can read thoughts and dream of the future. With this revelation, she's introduced to the group her mother once associated with, a group of those with mysterious abilities who fought against ghouls and necromancers. She's confused, worried to be sure, but there's a part of her that always wanted to have an adventure. To save those she cares about from evil-doers and monsters. But this kind of evil was unexpected. And it isn't long until her new guardian, a mysterious man with a curious nature, reveals to her the work that is to be done.

I found this to be a rather quick read, time seems to pass almost too quickly, but the moments are there for Jess to learn and investigate, for her to wonder and explore. For her to hear the truth about her deceased father. And it's nice that she's not alone, that there are others like her in Emily and Gabriel to stand alongside her. I would definitely recommend this to fans of spooky and mysterious middle grade books.