Me on The Only Thing Worse Than Me Is You 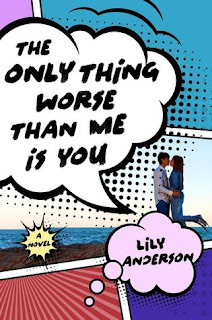 Title: The Only Thing Worse Than Me Is You
Author: Lily Anderson
Release Date: May 17, 2016
Publisher: St. Martin's Griffin (Macmillan imprint)

Trixie Watson has two very important goals for senior year: to finally save enough to buy the set of Doctor Who figurines at the local comic books store, and to place third in her class and knock Ben West--and his horrendous new mustache that he spent all summer growing--down to number four. Trixie will do anything to get her name ranked over Ben's, including give up sleep and comic books--well, maybe not comic books--but definitely sleep. After all, the war of Watson v. West is as vicious as the Doctor v. Daleks and Browncoats v. Alliance combined, and it goes all the way back to the infamous monkey bars incident in the first grade. Over a decade later, it's time to declare a champion once and for all. The war is Trixie's for the winning, until her best friend starts dating Ben's best friend and the two are unceremoniously dumped together and told to play nice. Finding common ground is odious and tooth-pullingly-painful, but Trixie and Ben's cautious truce slowly transforms into a fandom-based tentative friendship. When Trixie's best friend gets expelled for cheating and Trixie cries foul play, however, they have to choose who to believe and which side they're on--and they might not pick the same side.

The Only Thing Worse Than Me Is You is full of snark, sci-fi pop culture references, clever banter, and a silly reason to hold a grudge for a decade. It's fun, clever, and has some great female friendships.

Trixie is all brains and sass and snark and attitude. She's sharp and determined, will support and defend best friends Harper and Meg with everything she has (because she knows they also have her back, even when they're acting weird), and she won't let anything go. Like getting her revenge on Ben West, even if the reason, which dates back to their elementary school days, seems childish. But Trixie can't let it go. They always clash, battling with quips and snide remarks. Because she can't let go of anything, like her revenge, like her friends, like her comics and her fandoms, she can come off as harsh and unfair. As too stubborn. But every character has flaws. It's her confronting them, coming face to face with them and learning from them, that makes her interesting as a character.

The sci-fi nerd in me loves the idea of this book, of teens reading comics and loving science fiction. There are lots of references to shows and comics like Doctor Who, Firefly, Buffy, Spider-Man, and Battlestar Galactica. I do wonder if some of these are a bit dated, some of these shows were on when I was in high school, but the internet doesn't like letting things fall into the ether of the forgotten. Some shows, like Doctor Who or Buffy, are timeless. I also love that this is a modern retelling of Shakespeare's Much Ado About Nothing. Knowing the play means knowing how the characters will progress so I knew how it would all end, but it was still fun to read. Fun to see how everything would happen in a modern setting.

I had so much fun reading this. Every time a TV or comic reference came up that I knew I would chuckle and keep on reading, waiting for the next one. As a fan of certain sci-fi shows and certain comics (like Saga), this was the book for me. This is the book I wish I could hand to teenage me to have fun with. This is all kinds of geek fun and supportive female friendships. A must-read for self-proclaimed geeks.