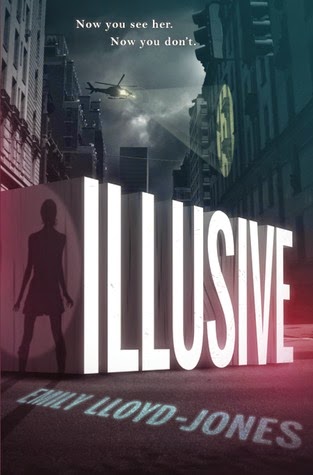 When the MK virus swept across the planet, a vaccine was created to stop the epidemic, but it came with some unexpected side effects. A small percentage of the population developed superhero-like powers. Seventeen-year-old Ciere Giba has the handy ability to change her appearance at will. She's what's known as an illusionist. She's also a thief. After a robbery goes awry, Ciere must team up with a group of fellow super-powered criminals on another job that most would consider too reckless. The formula for the vaccine that gave them their abilities was supposedly destroyed years ago. But what if it wasn't? The lines between good and bad, us and them, and freedom and entrapment are blurred as Ciere and the rest of her crew become embroiled in a deadly race against the government that could cost them their lives.

Illusive is an intense thriller, an action-packed adventure, a series of events and car wrecks that come together over and over in a battle between cops, criminals, and a secret that could change the world if it falls into the wrong hands.

One of the first things about Ciere that I like is she's an illusionist, she can create any kind of illusion, can trick anyone into seeing someone or something that is or isn't there, but she's bad at it. Just because you have superpowers doesn't mean you're perfectly skilled. Because she's not, she's foolish and reckless, she's frightened and frail and useless in a fight. She's jumpy and impulsive. But she's still trying to fix her problems.

Ciere's world is a curious one. So familiar because it's Earth, but because time has passed, because of the MK virus and its vaccine, it's not exactly the same. And so there are some differences, some advances in technology. Some new groups and new crimes. New labels and reasons to fear people.

What's interesting about books with thieves and crime syndicates and government agents, books like this, is that the lines between good and evil are blurred beyond all recognition. It's not about good and evil anymore, not about right or wrong. Instead, it's a fight for survival, for freedom. Ciere has committed crimes, and she's done that in order to survive. She was pushed to the edge of the cliff and found the only escape route that guaranteed her living one more day. Technically, almost every character has committed one crime or another, but would all of them be considered evil? And what about the FBI agents? They don't exactly have the best motives when it comes to people like Ciere.

A book like this certainly humanizes thieves and criminals. There is always a reason why crimes are committed, why a person steals priceless works of art or robs a bank. Why a person works as a bodyguard for a crime boss. It's certainly an interesting look into a different world, one where you're constantly looking over your shoulder, constantly running, constantly hiding. A world where safety is just an illusion.

This book has a lot in it. Criminals and superpowers, running scams and schemes, government agents, truth and lies, plots and plans, secrets and suffering. And it all works together. There's a high level of tension running throughout the book, spiking when things go wrong and bullets start flying. A fair amount of the dialogue from Ciere and her group was witty and clever. I can see where there would be a sequel, where there are questions left unanswered and secrets still waiting to be unleashed, and I can see where this story as a whole ends. Knowing there will be a sequel makes me excited.