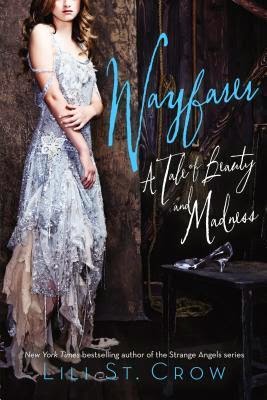 Newly orphaned, increasingly isolated from her friends, and terrified of her violent stepmother, Ellen Sinder still believes she'll be okay. She has a plan for surviving and getting through high school, which includes keeping her head down and saving any credits she can earn or steal. But when a train arrives from over the Waste beyond New Haven, carrying a golden boy and a new stepsister, all of Ellie's plans begin to unravel, one by one. Just when all hope is lost, Ellie meets an odd old woman with a warm hearth and a heavenly garden. Auntie's kindness is intoxicating, and Ellie finally has a home again. Yet when the clock strikes twelve on the night of the annual Charmer's Ball, Ellie realizes that no charm is strong enough to make her past disappear.

Wayfarer is a return to a world filled with magic and secrets, where danger is always present, where an orphaned girl is blind to her own worth, and where home is no longer a safe place.

Ellie is frightened, beaten down. There's some strength still left in her, though. She's determined to make it to the end of high school when she'll be able to leave a house that once contained happy memories but only holds fear, pain, and tears. Everything will be better then. She'll be able to make it on her own. She doesn't need charity, and Cami and Ruby don't need to know what's really going on with her stepmother. She doesn't need help from anyone, no matter how painful it gets.

But she's in denial. She believes she's no longer worth it. Worth helping, worth being friends with, worth saving. Her sense of self-worth and confidence disappear in such a short amount of time, but sometimes that's all it takes. Near constant abuse, pain, fear. Being told you're stupid, useless, a waste of time. Anyone would crumble. What will it take for her to put herself back together?

There's more romance here than in Nameless, more of an obvious romance. I won't deny that the guy in question pushes Ellie, that certain things he says or does gets her moving, pushes her further and further along the path she's wandering along, but she still has to make the decision to fight back. It won't work if he does the fighting for her.

A new book means a return to the enchanting world that is New Haven, a world with Family and their shadowed secrets, with charmers and their Sigils, with minotaurs Twisted with Potential gone wrong and jacks on the lookout for easy prey. The world building is extensive and creative. Not everything is explained fully and I don't seem to mind. This is how this world works. Family is Family, charmers are charmers. And jacks are jacks, feathers or fur or scales and all. Not everything can, or will, be explained.

Fairy tale retellings seem to be a dime a dozen these days, and while it's rather clear which tale Ellie comes from, it's the journey from start to finish that I enjoy. I'm often curious as to how the author will get from beginning to end, mixing bits and pieces of source material with their own ideas, plot twists, characters, and style of writing.

I've never hidden the fact that I'm a fan of Lili St. Crow's books so perhaps I'm biased, but this book didn't disappoint me. There's something about how she writes, what she writes, the worlds she creates, the characters that appear on each page, that makes me fall heart-first and head-second into the book.

(I purchased a copy of this book)
Posted by Lindsay at 6:00 AM